Bone up on your classic theater at The Antaeus Company 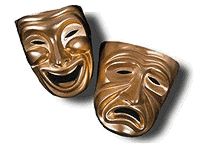 The sessions are free (donation requested) and there’s free parking. So go.