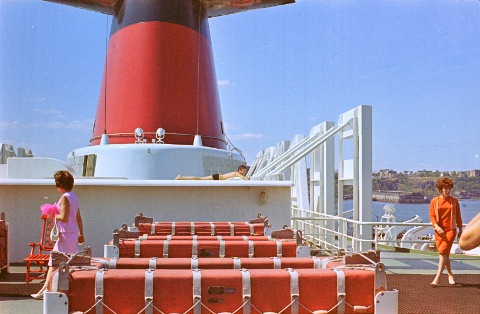 Days after seeing Peter Schlesinger’s wonderful photograph, France 1968 (above), part of the L.A.-born artist’s sculpture and photography show at Duke & Duke Gallery, I figured out why I love  it. It reminds me of a David Hockney painting. The hot color clash, cool depiction of the leisure class, and disparate figures all hearken the British painter’s work. But Schlesinger has evolved far beyond his time as Hockney’s protegee and muse. He brings it home to Los Angeles in a serious and classy mixed-genre exhibit that opened Thursday night.

I chatted on the phone with Schlesinger hours before his opening: “I grew up in the San Fernando Valley,” he said as an opener. “I attended Toluca Lake elementary school, and then my family moved to Encino. That was the late ’50s, and it was all pretty rural. I always did art, I started with private art lessons at ten. I was always doing extracurricular classes. 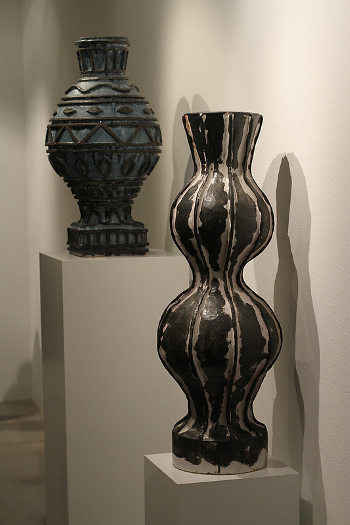 PausePlayPlayPrev|Next
arts·meme is honored to feature photography by alex berliner.

“My parents liked art. They took me to shows. They encouraged it. My Dad used to drive me to Saturday art courses [over the hill] when I was in junior high school.

“I attended UC Santa Cruz the year they opened it. I transferred to UCLA and studied with Diebenkorn, Llyn Folkes, Bill Brice and Ruba (?). There was an atmosphere to being in the L.A. art circle. I used to go to the La Cienega galleries.

“But I only wanted to get away. The Valley was so isolated. I always wanted to be a romantic expatriate artist. So I attended the Slade School [of Art in London]. I was in London for a decade, 1968-78, then I came back to New York where I’ve been ever since.”

The show features 25 ceramic sculpture works, awesome, weighty things that look lugged from ancient Greece, but were made in Schlesinger’s Brooklyn studio. Amidst the vessels and urns, a set of Schlesinger’s clear-eyed photographs of his European adventures. Now hanging on Melrose Avenue, they normally live in the artist’s 2003 memoir, “Checkered Past: A Visual Diary of the 60’s and 70’s.”