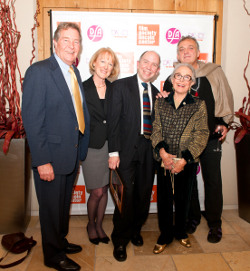 On 20 January 2012, the Dance on Camera Festival, now powering up in New York, honored Jacob’s Pillow Dance Festival Director of Preservation, Norton Owen, for his outstanding contribution to the dance film genre.

Said Marta Renzi, board president of the Dance Films Association, which runs the annual Lincoln center film festival: “Over the decades, this perennially boyish man has become a distinguished member of the dance film community. [We are honoring] his more than 35 years with Jacob’s Pillow in charge of the Pillow’s Archives, exhibitions, talks and documentation programs. Norton has been a faithful and avid audience member at DFA’s Dance on Camera Festival, often scouting films to be shown at the Pillow.” 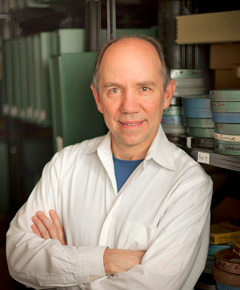 The Alabama-born Owen took a somewhat circuitous path to his role as the Pillow’s historian. Attending Adelphi University on Long Island, he met his destiny via his dance instructor, Norman Walker, who headed the Pillow in the ’70s.

Owen arrived at the Pillow in 1976 as a student dancer, and soon became Walker’s administrative assistant, handling contracts and correspondence, on an hourly wage. Serving as the festival’s press liaison in the late seventies, he fielded a constant stream of journalist’s questions concerning historical information. A dance archivist was born.

Owen now oversees the core collections preserved in the Archives at Jacob’s Pillow which were originally assembled by founder Ted Shawn. Materials have been continually added since the 1930s. The Archives at Jacob’s Pillow has approximately 6,000 films and videos from 1894 to present, 45,000 historic dance photos and negatives, 313,000 pages of unique printed materials, 27 trunks of costumes dating from 1915-1940, and a publicly accessible dance library.

The Archives are housed in an 18th century structure, Blake’s Barn, donated by the Hollywood dancer, Marge Champion, and named in honor of her late son. In addition to a central area for exhibits and lectures, the building houses a reading room with video stations providing access to the moving image collection. The lower level contains temperature-controlled storage areas and video production equipment.

Jacob’s Pillow remains at the forefront of the dance preservation field partly through its active participation in the Dance Heritage Coalition, an alliance of eleven major dance collections including the Library of Congress, Harvard Theatre Collection, and the New York Public Library for the Performing Arts.

Norton’s latest career achievement has been the 2011 launch of Jacob’s Pillow Dance Interactive, an online resource of video clips from performances that have taken place at the festival from 1936 to 2011.

I am personally beholden to Norton Owen for inviting me to the festival, in 2010 as a speaker on a panel honoring Jack Cole, and in 2011 as a Scholar in Residence under his supervision. To be at the Pillow, with fellows, pondering and discussing a great art form is a dream for any dance writer. Norton is a joy to work with, constantly on the move, managing scholarly research, and hosting the public’s access to the facility. He oversees a grinding weekly schedule of pre-performance talks, post-performance q&a, and twice weekly “Pillow Talks,” many involving complexities of guest speakers and audio-video torment. Throughout this maelstrom, Norton is accessible, scrupulously polite and helpful, and, miraculously, he completes the summer season without being buried by the avalanche of paper crossing his desk. His entire operation, which pairs intellectual thought with dance performance, is a jewel. My fond congratulations go to Norton on this well deserved recognition.