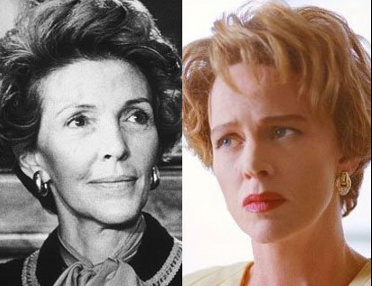 While delighting in Meryl Streep’s microscopic replication of Margaret Thatcher’s facial tics and bug-eyed pronouncements in “The Iron Lady,” do not neglect a prior film, “The Reagans,” which stars the great Aussie actress, Judy Davis.

“The Reagans,” a hugely fun, educational and entertaining docu-drama, dates from 2003. The massively ambitious undertaking, a made-for-television movie, traces RR’s career, starting in Hollywood, and marches through time and place with spot-on period mise-en-scene. The White House, Bel Air, and Palm Springs: all restaged with a fine eye by director Robert Allan Ackerman.

Who knew that a left-wing woman (that would be me) could feel so moved by the Ronnie-Nancy marriage? But the film is tremendously affecting; it advances with operatic energy and scope. Judy Davis, at its center, finds incandescence in a female character others would only find brittle. James Brolin, as the old man, also fantastic. I found “The Reagans” much more fun and satisfying than “The Iron Lady.”

Next up for arts·meme: Judy Davis in Life with Judy Garland: Me and My Shadow (2001), also directed by Ackerman.