Next up for Meryl Streep: Maggie T. takes cooking lessons 1 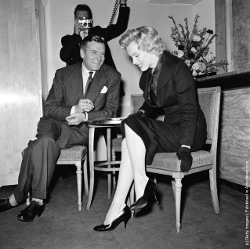 We’re just back from the local multiplex. Yes, we double-dipped.

We first watched a reenactment of an historical movie moment. An American actress, Michelle Williams, portrays a prior thespian, Marilyn Monroe, in her struggle to collaborate with Sir Laurence Olivier in the filming of “The Prince & the Showgirl.”

Kenneth Branagh plays Sir Larry in the bio-pic, and he nails his character so much better than Ms. Williams. So it all comes ’round; the Brit actor trumps Yank actor — nothing has changed whatsoever in 55 years!

From my studied perspective, “My Week with Marilyn” falls short, in its opening moments, in its meager attempt to replicate Jack Cole’s idiosyncratic choreography for Monroe. It gets Marilyn Monroe, singer/dancer, dead wrong, totally wrong, every step is wrong. Very sorry to report this~!

That brings us to the mother of all female impersonators, er … fine actors, Meryl Streep, whose visage fills the frames of “The Iron Lady,” a replication, down to facial tics, of the former British prime minister Margaret Thatcher — undoubtedly fodder for Oscar©.

arts·meme has learned that in the sequel, now in development, the Iron Lady takes cooking lessons. Her instructor?  The Iron-Skillet Lady, Julia Child! That means Meryl Streep on screen in ever single solitary frame of the movie! We keenly await this ne plus ultra of bio-pics! Meryl and Meryl, on split screen. Negotiations under way for top billing …

One comment on “Next up for Meryl Streep: Maggie T. takes cooking lessons”