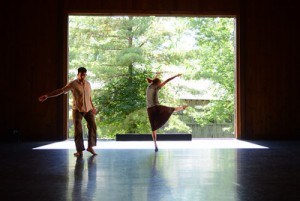 The gifted duo, Jodi Melnick, a former Twyla Tharp dancer, and David Neumann, a dance-theater-comedy specialist, created the absorbing work on a commission from the Pillow, and it caps a shared evening of their individual choreography.

“July” is on view literally down wind from the Pillow’s Ted Shawn Theater where Trisha Brown, the high priestess of post-modern dance, celebrates the fortieth anniversary of her company. One cannot but note an implicit passing of the baton, a generational shift all the more meaningful for taking place at Ted Shawn’s former Berkshires farm, where so much American modern dance history has transpired. 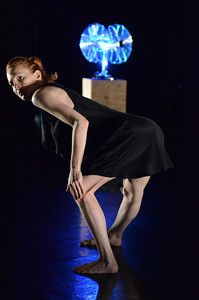 “July” begs a description of its players, two very different dancers. Melnick vacillates in performance as subtly as light refracts through a prism; in one moment, the slender redhead projects a flinty, hard edge. Then, womanly heat arises from her long twisting torso. On third glance, she’s gone — a ghostly, fragmented figure remains. It’s fascinating watching Melnick, and while she moved in the shadows of “Fanfare”‘s electric-fan projections, I found myself wishing it would go on all night. 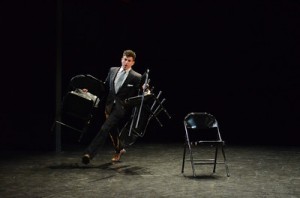 Melnick shares the evening with her former SUNY Purchase classmate and longtime platonic pal, the classically good-looking Neumann. In his first outing, “Tough the Tough,” Neumann is all distinct form and boyish clowning. Trundling around the stage loaded down with folding chairs, he takes a great pratfall, absurd and laugh-out-loud funny, mostly because it’s so predictable.

In “July,” he’s putty in Melnick’s hands; mostly, he melds with her idiosyncratic way of moving that has no discernible start or ending point. She cleaves to him, he molds around her, sees her, caresses her, often without touching her, merely by his presence.

In an extraordinary sequence, shown in the photo at right, Neumann, on his back, offers Melnick the flat of his flexed foot. She accepts this invitation, 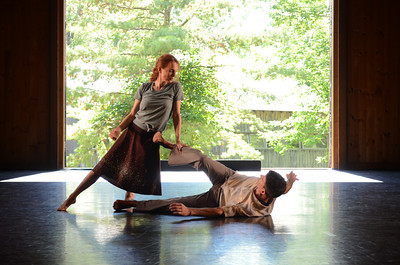 and balances on a perch that in the real world would be not too stable, but when the muscular Neumann is behind it, she’s secure. Balancing there, she crawls down his leg using her arms; he supports her, and the two rock gently, as over a wide gaping crevasse. He’s her foundation, she cradles in the shell of his receptive body. The simplicity, the originality, the giving of physical form to an ephemeral such as trust between a couple — it’s what dance does best.

Whether by intention or accident, “July” augurs a return to, or perhaps a renewed version, of chivalry and respect between a man and a woman in the art form. For dance, reflecting changes in society, has journeyed far, too far for my taste, toward a flattening of gender differences. (To be fair, this prevails more in the contemporary ballet world, in which we often see crude interactions that border on the physical abuse of women.)

In “July”‘s version of Bergman’s “Scenes from a Marriage,” these two handsome creatures — she with flaming red hair, he with hair coal black — project a vision of masculine strength coexisting with feminine mystery. Kudos to Jacob’s Pillow Artistic Director Ella Baff for her vision in pairing the two downtown dance makers, enabling “July” to come to pass in the Duke’s beautiful natural setting. I suspect that after seeing “July,” couples of any sexuality will go home and be nice to each other.