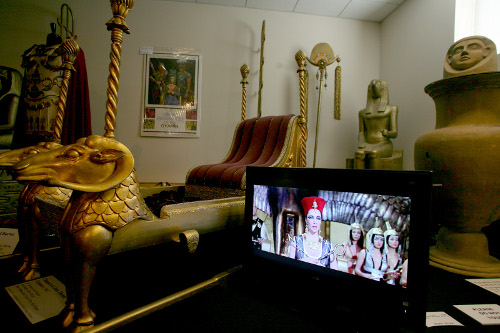 “Isn’t there some millionaire out there who can save all this?” The question hung in the air as hundreds of ordinary people, film buffs with their kids, designers and lookie-loos lined up to ogle the astounding array of costumes and props collected over the years by Debbie Reynolds and now, sadly, being put up for auction.

The collection is on display for preview before Saturday’s auction [June 18, 2011] at the Paley Center in Beverly Hills. A visit is a jaw-dropping experience. So many costumes from so many landmark films, it simply boggles the mind that no one has stepped forward to save the collection before it’s dispersed in a diaspora of Ben Hur-ish proportions. 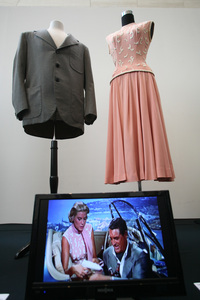 As I worked my way through the crowd, I overheard again and again that same lament: “Why couldn’t this be saved?” Apparently not for lack of trying, as Reynolds has found out. She has finally given up her dream of creating a museum in Los Angeles to house her vast collection of some 5,000 costumes and sets after a failed attempt to open one in Las Vegas in the 80’s. Now she is ready to move on.

Walking through the rooms of pristine costumes, each accompanied by a loop of the scene from its movie, I was awestruck at the tenacity of Reynolds, who attempted to save all this history. Where did she keep it all? And how did she keep them in such good condition? Every gown looked pristine.

“They all came folded in plastic tubs,” said a Paley Center employee, “We were shocked at how perfect everything was.” Everything from Gene Kelly and Donald O’Connor’s vaudeville suits from “Singin’ in the Rain” to Marlon

Brando’s uniforms in “Mutiny on the Bounty,” Audrey Hepburn’s gown from “My Fair Lady,” Katherine Hepburn’s from “Mary Queen of Scots,” and Marilyn Monroe’s iconic white dress from “The Seven Year Itch,” displayed next to the photograph that froze it in our memory as she famously stepped over a subway grate and tried to maintain some modesty. There is Grace Kelly’s pink appliquéd dress and Cary Grant’s sports coat, come to life as they picnicked on fried chicken in “To Catch a Thief.” Even one of Austin Powers’ 60’s suits made the cut. All the greats are there: Hepburn (Kate and Audrey), Kelly (Gene and Grace), Donald O’Connor, Barbra Streisand, Bette Davis, Greta Garbo, Rudolph Valentino, la Liz, Brando.

Joanne Paull let her daughter Elizabeth miss a day of school (“They were cleaning out their desks, so I decided it was okay”) to come and view the collection with her mom Holly Margulies in tow. It was as worthy an experience as any museum had to offer.

Erica Enders, who works with Profiles in History, the auction house Reynolds chose to sell the collection, says she has met the actress several times. “She’s got a sad face,” she said. “This is hard for her.” No doubt. My condolences to Debbie.

In my opinion, she deserves not only a museum, but her own special Oscar for trying so hard to preserve Hollywood’s history.

This story is reprinted with permission from laobserved where it was originally published.