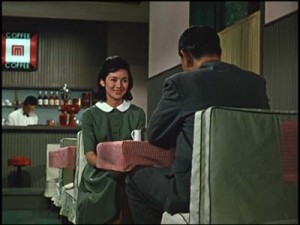 There are still several wonderful films between now and then, but for your calendar’s purposes, one date stands out.

In his program note setting up the film, reprinted below, you’ll note Birnie’s inclusion of the word “heart” in the first sentence. This indicates why so many of us love his screenings. Take it away, Ian:

Japanese cinema occupies a special place in my heart so I was gratified that every program we mounted including single revivals (Tokyo Twilight, The Story of Late Chrysanthemums) attracted large and dedicated fans. In addition to two series of Japanese classics curated by Susan Sontag, the department presented major retrospectives devoted to three of Japan’s greatest filmmakers: Kenji Mizoguchi, Nagisa Oshima, and in 2004 Yasujiro Ozu who remains in a class by himself.

Like The River, Ozu’s late color masterpiece is steeped in nostalgia and the acceptance of life’s disappointments; and its tale of a widow who urges her single daughter to marry and leave home marks the passage of time. No plot summary can convey the harmonious achievement of Ozu’s unique style of filmmaking: the geometric framing of the shots, the musical rhythm and repetition of the scenes, the muted color palette, and the restrained performances of actors like Setsuko Hara as the mother and Chishu Ryu as a family friend all magically combine to produce a work of profound insight and compassion.