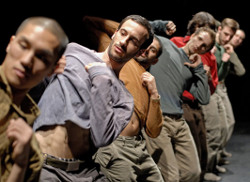 Shechter has difficulty acknowledging his own success. ‘I’m experiencing failure daily,’ he says. ‘It’s difficult for me to connect to the idea that I’m successful. I can see it in the fact that my work tours all around the world and I get commissioned and produced, but I really don’t experience my life like this. I mostly don’t succeed in doing what I want to do, on a daily basis,’ he says, explaining that what he has in his head never comes alive as vividly as he’d like in real life. ‘ …

‘I experienced it very early on in my life – the family I grew up in, the country I grew up in, understanding slowly the situation around me,’ he says. ‘You get propaganda from everywhere. People are selling you stuff all the time – the West, the East, the Arab world. You realise that you have no idea what the truth is, what the reality is, and you have very selfish individuals around you all the time. ‘And as a result of a lot of selfish animals living together there is the feeling that there are very powerful systems that nobody actually planned, they fell into place through selfishness and greed.‘

Shechter, maker of fierce dances, has a new work premiering in London at the Sadler’s Wells Theater, called “Political Mother (the Choreographer’s Cut).”

Read the full interview in Time Out London.