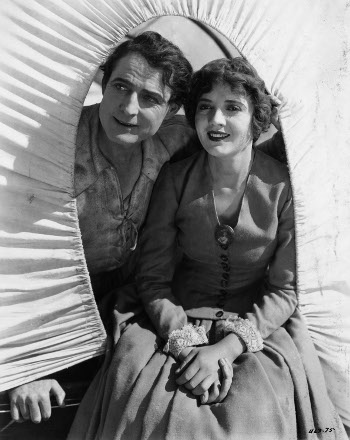 “The Covered Wagon” (1923) will be the next film screened in the Academy of Motion Picture Arts and Sciences’ “Summer of Silents” series on Monday, July 11, at 7:30 p.m. at the Academy’s Samuel Goldwyn Theater.

I’m going. Having lived in California for 21 years, I’m fascinated by stories and images of the western expansion, especially when filtered through the lens of 1923, when L.A. was in full swing.

A 35mm print courtesy of the Paramount Pictures Collection at UCLA will be screened. Live musical accompaniment performed by Will Ryan and the Cactus County Cowboys. How great does that sound?

The epic adventure of pioneers on a dangerous journey along the Oregon Trail is considered one of the first great epic Westerns and features scenes filmed on location in Nevada and Utah.

At 7 p.m., surviving fragments from the 1924 Medal of Honor winner “Abraham Lincoln” will be screened as part of the pre-show.  Additionally, images from “The Hunchback of Notre Dame” (1923) will be projected in 3D.

“Summer of Silents” features silent film classics from the 1920s, all of which received the Photoplay Magazine Medal of Honor, on Mondays through August 8.  Additionally, on Wednesday, July 20, Buster Keaton’s “The General” (1927) will be screened.  Though not a Photoplay award winner, the comedy is a classic of the silent era.

Remaining schedule for “Summer of Silents”:

July 18   “The Big Parade” (1925)
The feature will be introduced by film historian and Academy Honorary Award recipient Kevin Brownlow, with a recorded stereo orchestral score composed by Carl Davis.

July 20  “The General” (1927)
“Then and Now,” a photographic comparison tour by John Bengtson outlining the filming locations for silent era comedies by Chaplin, Keaton and Lloyd, will be presented during the pre-show.  The feature will be introduced by Kevin Brownlow with a recorded stereo orchestral score composed by Carl Davis.

July 25  “Beau Geste” (1926)
“Saturday Afternoon” (1926), starring Harry Langdon, will be presented during the pre-show.  The feature will be introduced by Frank Thompson, with live musical accompaniment by the Mont Alto Motion Picture Orchestra.

August 1   “7th Heaven” (1927)
“Mighty Like a Moose” (1926), starring Charley Chase, and a surviving fragment from the 1928 lost film “The Patriot” will be presented during the pre-show.  The feature will be introduced by Janet Bergstrom, with live musical accompaniment composed by Michael Mortilla, and performed by Mortilla on piano, Nicole Garcia on violin and Frank Macchia on winds.

J. Warren Kerrigan (left) and Lois Wilson in a scene from THE COVERED WAGON, 1923, photo courtesy of AMPAS.