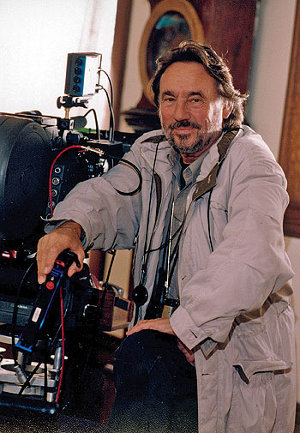 Following a double bill at LACMA so soulful and affecting that the feeling was beatific [“Electra Glide in Blue” & “Scarecrow” both from 1973], the museum hosted the great cinematographer Vilmos Zsigmond for a talk.

Zsigmond, in tandem with his compatriot Laszlo Kovacs, introduced a palette of mittel European muted natural light to Hollywood. According to Zsigmond, when he first arrived in L.A. (early project here), “American films were very bright and musical.”

The two Hungarians forged a new look and feel that came to characterize movies in the ’70s.

“One of the better of my movies,” he said. “I have the distance to look at it [now].  It’s very dark. I would not have the courage to do it that dark [today]. People don’t like when they cannot see the actor’s faces.

“It was an underlit film. The French nouvelle vague was underlit. German film was underlit. It looks very real. [In the seventies] pictures started to get very real. European influence. [Shooting “Scarecrow”] I was panicking because I didn’t have much time [to light the scenes]. The interiors have a dull look.

“Roger Ebert, one of my favorite critics, [reviewing “Scarecrow”] said something so funny: “A great still photographer like Jerry Schatzberg sure didn’t get any help from Zsigmond. It’s hard to look at; it hurts your eyes.”

“It was a real road movie, made on a very low budget, $800,000. We went to Bakersfield, we had to shoot in sequence. We were on the road. We sent someone ahead to find locations. There were no sets in the film. We used motel rooms and bars. 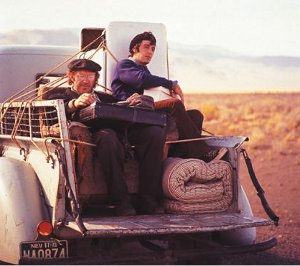 “We had a cinemobile [bus] that held everything, actors, equipment, crew. We had unusual crew, the smallest I ever saw, camera, gaffer, key grip, sound man, dolly man, boom operator.

“Everyone was helping; the driver of the cinemobile was pulling cables.

“We were traveling every day. At the beginning, in L.A., we went through the script and agreed on what we were doing. We settled in Denver, but we had no time to rehearse. [On the road] we had no time for rehearsal.” 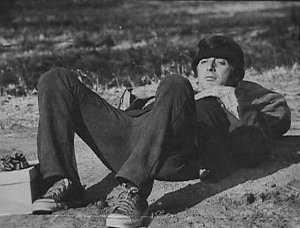 “We sometimes took scenes five or six times. Pacino and Hackman are actors who can direct themselves. They know what they are doing. Gene Hackman said that it was his most favorite film.

“The final scene [in which Pacino is catatonic], we had to shoot twice. We went home, Pacino didn’t like what he did. Schatzberg and he agreed to shoot it again. He [Pacino] improvised it again. I just followed the action with my zoom. The style is long set-up. Schatzberg liked keeping the scenes long — turn the camera as long as it’s good.”

“I like most of them [his movies]. I’ve been lucky. I worked with great directors. I worked with Altman, De Palma, Cimino, Rydell, Schatzberg, Spielberg, all directors who love the image. I would have loved to work with Fellini … all the directors I admired, so many of them … Bertolucci.

“[When watching my old films,] I don’t see mistakes. I like the mistakes. It makes it real.”