Saturday’s showcase of the Los Angeles County High School of the Arts (LACHSA) dance program, which included marvelous snippets of Jiri Kylian choreography, also featured a serene demonstration of Lester Horton technique as taught to the next generation by master instructor Don Martin.

Says Martin: “Lester was a genius. He was ahead of his time. He was doing innovative things that transcend time.”

The Horton dance technique is a kind of challenging physical tongue-twister; it features a sculptural use of the body that is so idealized, clearly envisioned, and unambiguous in its relationship between torso and limbs that it distinguishes itself spectacularly from today’s “noodling-around” (non) techniques. 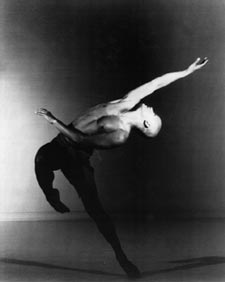 Horton’s imbuing of movement with a regal nobility was common in early modern dance; his most famous artistic offspring, Alvin Ailey, raised the ante, using Horton technique to serve his purpose. The theme Ailey gleaned so effectively is that dance is lofty activity, bringing the dancer close to divinity.

Martin and Ailey studied together in the early 1950s at Horton’s Dance Theater on Melrose Avenue between Sierra Bonita and Curson Avenues.  Remembers Martin: “Carmen [de Lavallade] was taking class there. Alvin and I went to watch her.”

The three were buddies at Jefferson High School in South Los Angeles.

He says, “Alvin was a very talented young man. He must have been a precocious child, he was so energetic.

“But, how can I put it? The student was not beyond the Master.

“Many people even think Lester was black! [because of Ailey’s connection to him.]” 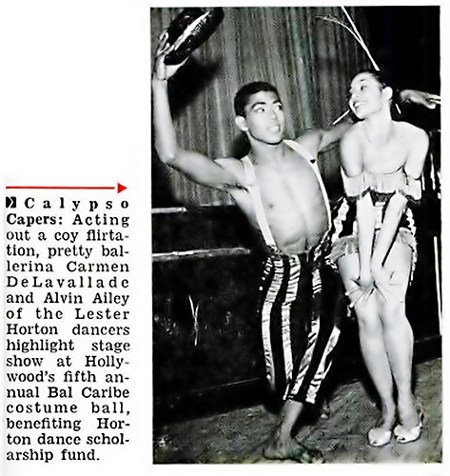 “Not only a pioneer in the modern dance field, Lester Horton (1906-1953) was also a trailblazer in making a home for the nascent art form on the West Coast, basing his choreographic and training endeavors in Los Angeles.

Besides early classes in ballet, aesthetic, and Native-American dance, Horton studied at the Denishawn School and with Michio Ito. The Lester Horton Dance Group first appeared in 1932 and became noted over the ensuing two decades for an individual technique and theatrical style that embraced themes of social and political protest as well as satire.

“Horton also choreographed commercial projects and created the dances for nineteen Hollywood films. He excelled as a costume and set designer and opened Dance Theater in 1948, a teaching academy that was converted into an evening performance arena.

“Founded by soloists associated with Horton, the companies of Alvin Ailey, Bella Lewitzky, and Joyce Trisler have perpetuated his technique, as have such dancers as James Truitte and Carmen de Lavallade. His specific technique emphasizes a whole body approach including flexibility, strength, coordination, and body awareness to allow freedom of expression. Lester Horton often designed his own sets, props, and costumes.”