Bloody mamas: violence against women in art and life 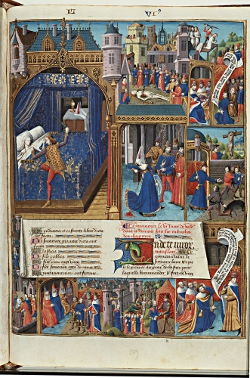 Monday, November 15, 2010, was a grisly night for women in Los Angeles. Both in art and in life, the blood of women flowed unnaturally and to no good purpose.

Shortly after midnight, Ronni Chasen, the owner of her own public relations firm and a hard-driving career woman, was found bleeding to death, crashed in her car on a quiet Beverly Hills residential block. For no obvious reason, a murderer rained five bullets through the window of her Mercedes Benz coupe, killing her not with passion but in a calculated manner; neighbors heard a deliberate rat-a-tat-tat-tat-tat. The clannish Hollywood community, in which the diminutive publicist seemed to be a permanent fixture, recoiled in horror and disbelief over Chasen’s violent end.

Earlier that same evening, across town and connected by the winding, mythic Sunset Boulevard where Chasen would die, I attended the opening of a heady art exhibit, “Imagining the Past in France, 1250-1500,” at the Getty Museum. One of the exquisite medieval illuminations (the ornate, sometimes gold embossed drawings that illustrate historic manuscripts) caught my eye and deeply unsettled me.

It was “Scenes from the Life of Lucretia,” dating from 1470, embedded in the manuscript, “Memorable Deeds and Words of the Romans” [detail at right]. Resembling an exquisitely detailed Middle-Ages comic book, it illustrates in drenched primary colors the rape of Lucretia. 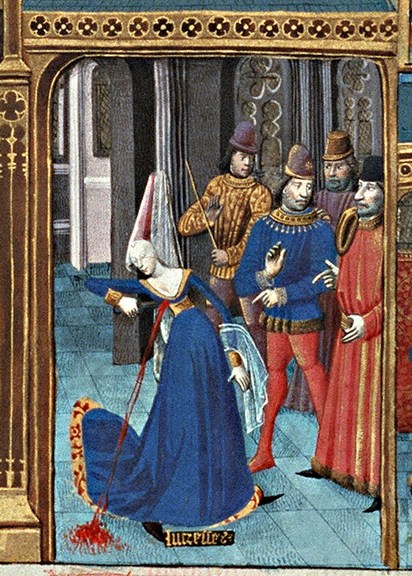 The married noblewoman Lucretia, alone in her bed at night, receives the surprise visit of a young man. He’s the prince’s son, and he rapes her. Thus desecrated, Lucretia seeks to spare her husband and family additional shame: stabbing herself in the chest, she commits suicide. Blood spurts in a red arc from her body, an oddly gruesome image rendered in pinpoint detail. An adjacent panel shows Lucretia’s naked white corpse on display, a knife protruding from her chest. The artist’s careful juxtaposition of her violent self- mutilation with the cool public display of her body is jarring.

Dr. Elizabeth Morrison, the Getty’s curator of manuscripts who co-curated the show with Anne D. Hedeman, spoke with me about “Lucretia” on the phone a few days later. “It’s interesting that you homed in on that,” she said. “We had a very hard time presenting Lucretia. We tried to make it clear, in the exhibition and in all the materials, that rape was considered very different historically than it is now.”

“In the Roman time period [the story’s origins], as well as the medieval period [when the illumination was created], rape was considered to be a source of shame to the woman. I think you can see the legacy of that in our own culture.

“The Lucretia chapter concerns the virtue of chastity. Lucretia was so chaste that she couldn’t live with the knowledge of her sexual event staining her character, so her suicide was considered a proper and virtuous thing to do. 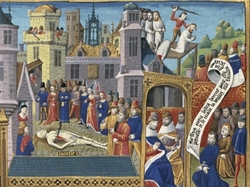 “There were lots of paintings [dedicated to this theme] through the Renaissance. It was famous enough that if there is a woman [depicted in art] committing suicide before men, you knew it was Lucretia.”

Dying for her art 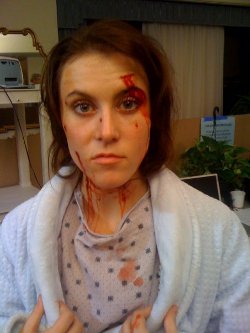 “Lucretia” held me riveted for another reason. I had just reviewed Darren Aronofsky’s overheated gothic horror flick, Black Swan. The director and his all-male screenwriting team subject the film’s female characters to as numbing a level of disrespect as possible without being pornographic. (Considering the film’s setting in the female-friendly world of classical ballet, this is no small achievement!)

For just under two hours, Black Swan parades female instability and self-mutilation, low self-esteem and back-stabbing by friends; it then culminates in a nasty suicide. The blood of women is a recurring visual theme of the hectically edited movie, which ends with the perplexing image of a triangle of blood, connoting unambiguously, to this viewer’s eye, a bleeding vagina. This image is so weird, seeping as it does through actress Natalie Portman’s [virginal white] tutu, that I can barely address it, let alone decipher its meaning. 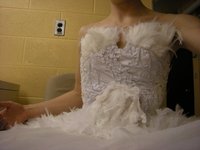 Similar to the Lucretia illumination, Black Swan strongly suggests that women’s independence, their desire and drive for achievement, and control over their sexuality leads, at least metaphorically if not literally, to their death. And in the hands of the male artist, it’s a bloody, violent ending for the woman.

Returning to the real world from the pretend world of art and film, I woke the next morning to the Los Angeles Times‘ shocking description of Ronni Chasen, crashed in her car, “bleeding profusely from her nose [with] blood on her chest,” evoking an image that completes an odd triumvirate with Lucretia and Nina. All three women pose in artful tableaux as their lives literally seep away.

Chasen, Chastity, and Cutting to the Chase

The three fables raise the issue of female vulnerability. Lucretia’s family, after she is raped, rather than embrace and protect her, abandons her and allows her to perish on behalf of their social sanctity.

Aronofsky’s film catalogues the myriad ways in which the aspiring ballerina, Nina, is abandoned. Let down by her ballet master, her dancing partner, her mother, and her girlfriend, Nina is left alone with her art, depicted in the film as a force of unyielding destruction. Whether it kills her, or she kills herself (the film suggests the latter) the bottom line is that Nina cannot succeed and therefore must die. (In this, Aronofsky recycles, much less convincingly, the trope of “The Red Shoes.”) Rather than nurture the vulnerable Nina in her quest for greatness, those around her abandon her to a solitary fate.

Of the choir of voices singing Ronni Chasen’s praises online after her death, one wonders if even a single individual expressed concern for her late-night safety, offering her a protective ride home, or even an escort to her car. The latest police assertion — that she was killed not by a contracted marksman but by a lone nut on a bicycle — does not undo the jarring impact of her murder on those of us who drive the streets of Los Angeles alone at night. 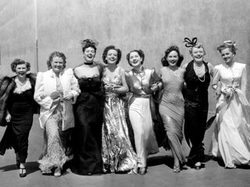 It’s a jungle out there for all of us, even for the boys in the ‘hood. But it feels like a particularly tough time for ladies. Generations seem to lurch between perceiving woman as tough broads or vulnerable creatures. But on last month’s Bloody Monday, the cycle seemed to hit a low ebb.

[The smiling cast of “woman director” George Cukor’s 1939 “The Women” stroll on MGM lot, at right]

Lucretia, a rape victim spurred by society to die by her own hand; Nina, who after achieving ballet’s penultimate role has it sap her sanity and lead to her self-destruction; and Ronni Chasen, who minutes after leaving a to-do list of tasks on her office answering machine, perishes inexplicably in an expensive leased car that failed to protect her. The violent quashing of women, whether in art or in real life, infuses the zeitgeist with an ominous message that resonates deeply. It has the power to shock this woman.