Seconds into Darren Aronofsky’s psychological thriller BLACK SWAN, the hyperkinetic camera zooms in on a pink pointe shoe. A woman is dancing, but we don’t see her. We see only the impeccable chop-chop of her shoes. It’s a smart directorial move. Cinephiles and foot fetishists are primed for a good time, but dance lovers’ hearts may sink.

With BLACK SWAN, the Harvard-educated Aronofsky ascends the ladder of high art, a change in direction from his prior, obdurately blue-collar outings: the wildly successful THE WRESTLER, and the druggy and disturbing REQUIEM FOR A DREAM. Building on the framework of the 19th-century ballet masterpiece “Swan Lake” and adding a maelstrom of impressive cinematic bells and whistles, Aronofsky examines no less profound a subject than the dual nature of women. In the process, he resuscitates that most spurned of Hollywood genres, the woman’s film.

The pointe-shoe sequence serves a double purpose. It lures the 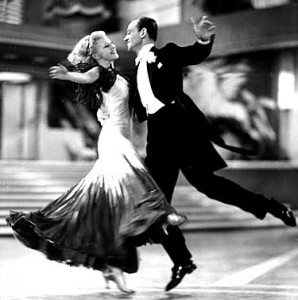 much-desired male demographic, which may have been dragged to the theater. But by disassociating the foot from its body, Aronofsky signals his defiance of conventional dance-cinematography wisdom: that the medium shot makes for the most felicitous marriage of dance and film. (Decades of experimentation by the likes of Michael Powell, Fred Astaire, Gene Kelly and Jack Cole have proved that the body in full view renders choreography coherent.) Disembodied arms, legs, torsos, and heads–often filmed in close-up–make BLACK SWAN perhaps not a great dance movie, but a visually powerful tour-de-force.

BLACK SWAN tells the story of Nina (Portman), a young dancer who craves ballet’s great dual role played by one woman, Odette/Odile. Nina, we are told, is a natural white swan, not because her dancing is particularly lyrical or ethereal, but because she’s still a girl–a virgin. Stuffed animals decorate her pink bedroom in the claustrophobic apartment she shares with her overbearing mother, a failed ballerina (Barbara Hershey). Her ballet master, Thomas Leroy (Vincent Cassel, who steals a woman’s movie from four women) warns Nina sternly that to truly understand and therefore properly dance the black swan role, she’d better fast-track her id. 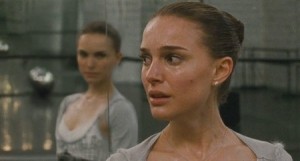 Repeatedly urged by the demanding Leroy to “Let it go!” (a real mission impossible considering the technical demands of dancing Odile), the browbeaten Nina applies herself assiduously to her own sexual liberation. Toward this end, the plucky Portman submits to a series of edgy and vivid sexual scenes with characteristic courage. Other than these moments of obvious pleasure, Portman spends the movie looking worried and unhappy. Is it naive to wonder why we never see Nina experience the joy of movement? 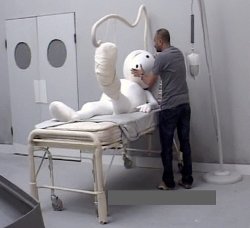 Winona Ryder — one of the most vivacious actresses of her generation — appears first in a marvelous snippet, lasting only seconds, that would make Joan Crawford proud. She rips up her dressing room, then strides by the younger Nina barking “What!?” Ryder’s pitch-perfect delivery of this one word leaves us wanting more, but soon she’s tied down in a hospital bed, black and blue and going mad. But that’s standard Hollywood treatment for smart women. Another fresh and compelling presence is Mila Kunis, playing Lily, Nina’s undermining rival. The lesson she has to offer Nina is to never trust another woman. But in a clever way, this reflects the ballet.

Aronofsky and his screenwriters Mark Heyman, Andres Heinz and John McLaughlin reduce the Petipa/Tchaikovsky classic in key ways, primarily by recasting it as a virgin-vs-whore story. Sex forms the dividing line between the two swans in the film’s view. In the ballet, Odile, the black swan, is aggressive, even sexually so. But she’s also smart, seductive, strategic. Aronofsky, who led Mickey Rourke to an Oscar nomination by showing the brie-eating side of a macho guy, fails to lend Portman the same dimensionality in her character.

Another way Aronofsky reinterprets his source material is in BLACK SWAN’s denouement. In the ballet, Odette and her lover Siegfried die together, seeking a transcendent place where boy-on-swan love can exist. By contrast, Portman’s Nina bears the film’s staggering conflicts internally, and moves toward her destiny alone. The loneliness of this, and the shattering view of Nina’s broken, thwarted relationships, say much about how society (and romantic love) has changed since 1877 when “Swan Lake” had its debut. 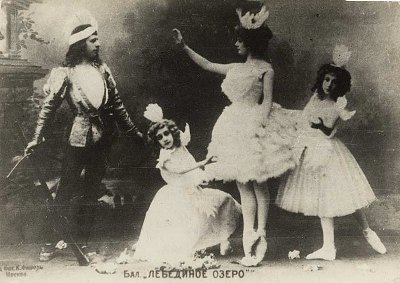 BLACK SWAN bourrées into the ether at a moment of particular vulnerability in the dance world. With each generation further removed from the aristocratic conventions of 19th-century European classicism, troupes are scrambling to maintain relevance–-and funding. The teenagers who fill the ranks of “Swan Lake”’s corps de ballet wouldn’t know a peasant from a pheasant, let alone a swan.

Aronofsky complained in interviews about the cloistered world of ballet not giving him access. And despite a roster of ballet consultants in his film’s credits, cinema’s latest wunderkind has his way with this beautiful art form, applying high-tech virtuosity for his own agenda. He tramples on classical ballet’s delicate offerings — its purity, its way of connecting us to the past, and its uplifting spirituality. I’ll stick to last year’s gorgeous LA DANSE in which the 80-year old purveyor of rigorous documentaries, Frederick Wiseman, comes out of the closet as a balletomane of rapturous proportion.

Read this story on the AFI blogpost. Read it on The Huffington Post.