Merce and the midgets 2 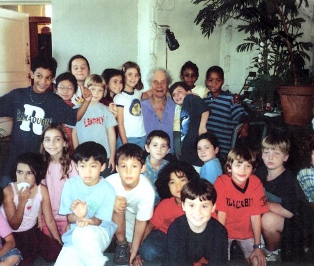 The story concerns a class of P.S. 234 third graders taught by Ms. Lent, then a school teacher. She takes her kids to the Merce Cunningham Dance Studio to blow off a little steam.

Making friends with Merce, the youngsters soon find themselves cast in a show. Here, read the dateline-2002 story yourself.

He met the students after Ms. Lent had taken them to his studio in the Westbeth artists housing in the West Village. Having been evacuated from their school and relocated after Sept. 11 last year, the children were crammed into a temporary school and badly needed some time in open space, Ms. Lent said.

Mr. Cunningham was impressed by what happened when the children were invited to throw off their shoes and parkas and spread out across the studio. ”It was tumult,” he said. ”It was wonderful.”

They were invited back to watch two more rehearsals.

”Now that we know each other, we don’t have to be so formal,” Mr. Cunningham told them the second time.

Mr. Cunningham decided to weave them into ”events,” pieces he has made for many years by joining repertory fragments into a new whole. ”I can’t give you a reason,” Mr. Cunningham said when asked why he had incorporated the children. ”It just came up.”

The children will perform with the adult dancers at the start, then sit inside the pods. Mr. Cunningham was concerned that the children might get bored.

”If you want to draw then, go ahead,” he told them.

2 thoughts on “Merce and the midgets”