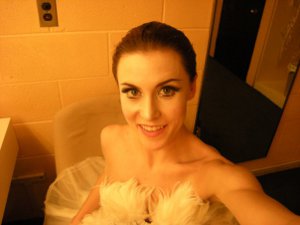 Reports Prosa on her amazing and unexpected first-ever movie experience:

“I went to audition at an open call looking for extras to be background fill-in as dancers.

“Darren pulled me aside and said, ‘You have a lot of resemblance to Natalie.’

“He took me in and interviewed me, taking a million photos from a lot of angles. I ended up doing several things on that film. I did photo doubling for her.

It’s a dark film; you are not sure what is real and what isn’t. There is a double for Natalie  — a kind of evil twin. You wonder, is it another person or is it she imagining herself?

“They were shooting my feet from the waist down. I did stunt doubling as well, fight scenes and getting pushed through mirrors, so I got pulled into different aspects.

[Click on Prosa’s gnarly feet, at right. When shown in preview screenings of BLACK SWAN, they elicited gasps of horror (but yawns in a ballet studio). They’re the result of special-effects make-up.] 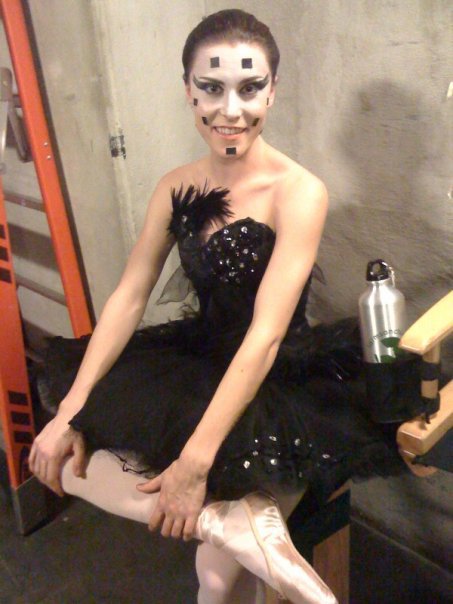 Says Prosa: “Natalie took class, she studied for several months, from the waist up is her. Sarah Lane a soloist at ABT, did the heavy tricks, she did the fouéttes, but they only had her for a limited time, a couple of weeks, so I did the rest of whatever dance shots they needed.”

“We filmed in New York.

“She [Portman] definitely put her work in. Just in a couple of months, she looked credible — all the dancers on the set were really impressed at how well she pulled that off — it was pretty amazing.

“It was one of the best experiences I’ve had in my career,” Prosa concludes, her voice ringing with pride.

Thank you, Kimberly Prosa, and, on behalf of all dancers, we think you deserve an Oscar!

Like this? Read more on our favorite body double: