A heady evening with Hedy Lamarr 2 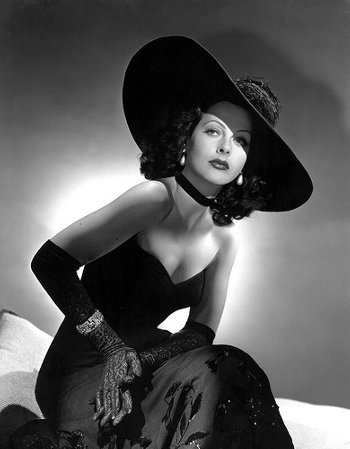 While he was growing up in Ottawa, Illinois, the film writer Stephen Shearer’s mother told him that in 1939 she and a girlfriend went to the local cinema to see Charles Boyer in “Algiers.” Co-starring with the Frenchman was MGM’s latest European import, Hedy Lamarr.

In her first appearance in the film, cinematographer James Wong Howe shoots Lamarr, known as “The Most Beautiful Girl in the World,” in deep shadow. As she approaches the camera, her face emerges in the light.

And they didn’t make ’em like that in Ottawa, Illinois.

I learned this fun nugget at a book talk at Larry Edmund’s Bookshop on Hollywood Boulevard, celebrating Shearer’s new biography “Beautiful: The Life of Hedy Lamarr.”  The Austria-born actress was among the many German-speaking Jewish artists who made their way to California in the 1930s. 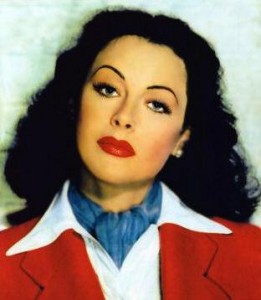 Born Hedwig Kiesler, Lamarr was a celebrity in Europe before coming  to the U.S. — notorious for bobbling in the buff in “Ecstasy” (1933). In 1937, anticipating the Anschluss (Shearer intimated that Lamarr was well connected in political circles), she and her husband departed Vienna. Meeting L.B. Mayer in London (he was in town scooping up European talent, to his credit, much of it Jewish), she inked her MGM contract.

As the duo plowed across the pond aboard the S.S. Normandie, Mayer renamed his exotic charge, so the legend goes, after Barbara La Marr, the heroin-addled silent film actress. In an alternate version, which I prefer, the multilingual Lamarr gazed at the sea through her gorgeous eyes and murmured, “La mer!”

One other charming detail of that crossing is that L.B. dispatched Hedy — who more or less had a knapsack and about 80 bucks to her name — to the ocean liner’s Chanel boutique on the first-class deck. There, on MGM’s dime, Lamarr was suited up for the mob of press awaiting the Normandie’s arrival in New York harbor.

Shearer noted that Mayer mismanaged Lamarr’s career. He was gifted at dolling up homegirls like Garland and Turner into cinema royalty. But in casting an elegant, intelligent, sophisticated woman like Lamarr, L.B. was flatfooted. This problem is amusingly addressed in “What Not to do with Hedy Lamarr,” LIFE magazine, August, 1939.

I’m a big fan of Cecil B. DeMille’s “Samson & Delilah” (1949); one reason why is the gorgeous Hedy Lamarr’s precise performance. Leafing through the “Samson” files at the DeMille archives while investigating Theodore Kosloff‘s choreography of the epic, I came across a telegram Hedy sent to DeMille. Holding the fragile paper in my hands, I read the words of a woman sitting on top of the world. 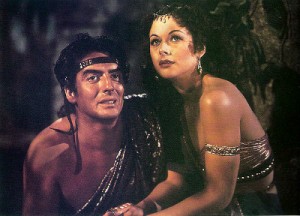 PARIS FRANCE
JULY 8 1948
MR. CECIL B. DE MILLE
PARAMOUNT STUDIO
HOLLYWOOD CALIFORNIA
———-
HAVING THE TIME OF MY LIFE STOP CAN I DO ANYTHING FOR YOU STOP STAYING AT GEORGE V.
LOVE DELILAH
————

2 thoughts on “A heady evening with Hedy Lamarr”