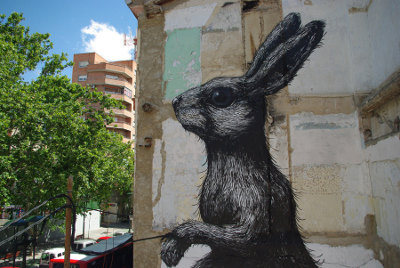 No, not the denizens of the L.A. art world — that would be rude. ROA paints, with genuine affection, rats, weasels, squirrels, birds, skunks, and mice – um, did I mention rats? It’s all part of the natural environment we city dwellers would rather not acknowledge. But ROA reminds us that these small beasts cohabit our universe. His impressive output leaves a queasy, disturbing feeling.

The Ghent native’s got an x-ray vision theme: many of his works have moving components, neatly hinged little doors that swing open, laying bare the creepy crawlers’ scrawny insides. One has a delicate, laddered vertebrae; another, a sweaty thumping heart, and then there are tiny rat livers. Wall-hangings that operate like clever Venetian blinds flip neatly to reveal both sides of the ROA creatures. 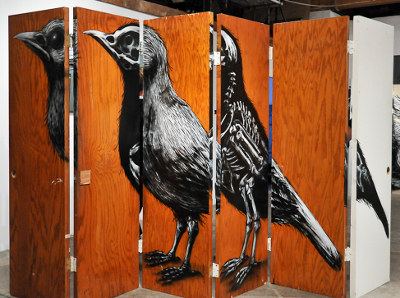 ROA first learned his craft by doodling; he then graduated to graffiti. Now he’s King of the Critter Underground. A proudly indigenous artist, he developed a hankering for the skunks of Los Angeles; in London, he featured foxes.

The pallid redhead generated his entire New Puppy show in an energy-burst stretching over two weeks. Totally zonked by the time of his opening, ROA, though wan, looked nonetheless pleased.

ROA’s hot in Europe. Last month he made the cover of the niche street art magazine VNA. He was just published in the Thames and Hudson art book Street Sketchbook Journeys. This summer he participated in seven street art festivals, from Spain to Norway. In 2010 he had solo shows in Paris, London and New York.

2 thoughts on “ROA wrangles the rats of Los Angeles”