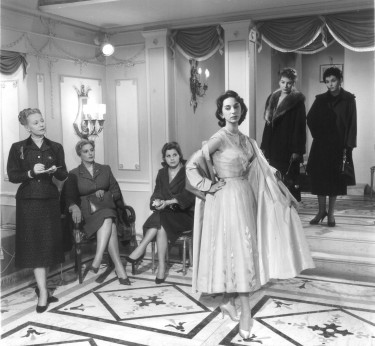 How pleasant to stroll onto the campus of the Los Angeles County Museum of Art, and travel in time and space to Italy of the 1950s — and totally avoid LAX.

The film depicts the world of Clelia, a Rome-based fashionista sent by her employer to open a boutique in the smaller, northern city of Turin. Clelia soon falls in with an arty group of architects, artists, models, and one determined suicide candidate.

Across the pond (and over the river and through the woods), Hollywood was churning its own version of the genre. Ladies of the ’50s certainly had their cat fights, but they also enjoyed strong sisterhood. Unlike today, the values, feelings, experiences and behavior of women seemed to fascinate male screenwriters.

“I love LE AMICHE. The storytelling is brilliant; the characters are amazing.

It’s way ahead of its time. My favorite moment is when Ferzetti comes out of the restaurant after the brawl — Cortese follows him and they lean, without speaking, against a wall in the rainy street, with the lamp silhouetting their overcoats. It’s a shot that epitomizes classic Italian cinema.

Our screenings were very successful. Over 1,300 people attended and the distributor did well too, which pleased me.”