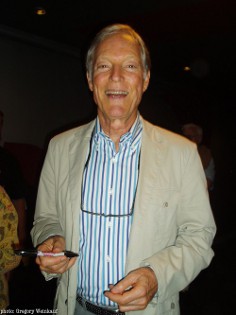 It was touching to see Richard Chamberlain with his wild-man director of forty years ago, Ken Russell, at Sunday’s screening of the octogenarian’s exuberant Tchaikovsky biopic, “The Music Lovers” (1970).

The reversal of the usual post-screening Q&A set-up also seemed fitting. The actor and the white-haired cinema maestro sat not before the audience, on a stage, but amidst it in the top rows of the house. This forced an arrangement in which cinephiles, dazzled by the exuberant color film that had just splashed the Aero’s football-field-sized screen, paid homage to Russell from below, like beseeching courtiers. Words like “radical,” “influential,” and “groundbreaking” got attached to Russell’s slew of ’70s movies.

The feisty, rotund Russell seemed to enjoy his royal roost; he’s British, after all. Piercing any pomposity with flattening sarcasm, he sputtered in response to some blather about movie-making being a “collaborative process.”

“It is?” Russell nearly howled. “No one told me that!  I did everything!”

As for Richard Chamberlain, who delivered miracles as the tortured genius composer (and what a career, from Dr. Kildare to basically coming out of the closet through the surrogate role of Tchaikovsky), is there a lovelier or more gentlemanly movie actor? Still looking terrific while posing patiently for photos — including this one for arts•meme —  Chamberlain noted that he just finished shooting a film in New York.

Said Chamberlain: “Ken creates a feeling on the set that is very intense. He’s a little scary. He’s dripping with passion.”  Playing the role, he remembered, “I was scared, really scared. I was frightened by Tchaikovsky, but Glenda’s [Jackson, his co-star] riches never ceased to surprise me.”

He admitted: “I was a gay man in the closet. I was hiding it at that time. I suppose it did flavor what I did in the film because he [Tchaikovsky] was really in agony.”

“After the film was released, a Russian approached me and asked ‘How could you?'” [depict Tchaikovsky as a gay man].

Modestly explaining his exceptionally emotional performance, which includes realistic pounding of keyboards in a gorgeously filmed concert-hall sequence, Chamberlain said, “It’s all Tchaikovsky. I went for Tchaikovsky all the way.”

Addendum: In a recent interview in the Daily Telegraph, Ken Russell says: “The film I’m most proud of is “The Music Lovers” (1970), which featured the music of Tchaikovsky, because it was a masterpiece. It was the best film I ever made and I wouldn’t change it in any way.”