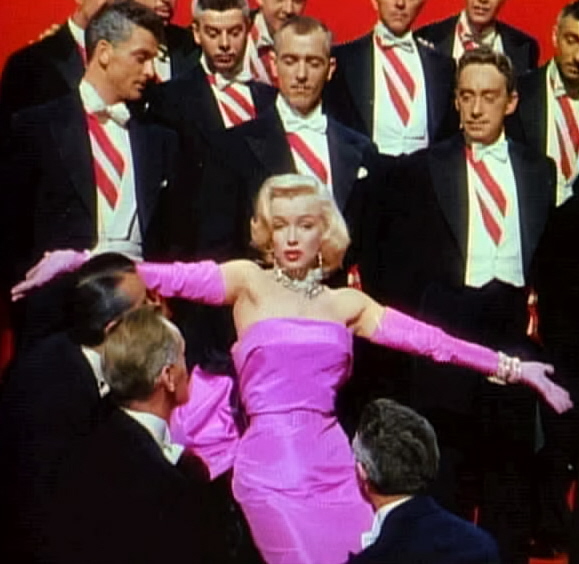 The home-run event of the summer was Howard Hawks’s comic masterpiece, Gentlemen Prefer Blondes (1953), projected on the humongous screen of the vintage Los Angeles Theater (1931) on Broadway in downtown L.A.

Viewed as oversized fleshy Amazons whose umpteen parts miraculously move together, MM and Jane Russell cruise through this nutty film, singing, dancing, and acting in an explosion of girl power you just don’t see any more in film … or in life. Both bombshells give impeccable comic readings of Charles Lederer’s hilarious script, which recounts their travails navigating the male world — getting what they want at every turn. Men are seen as hapless suckers who the clever lasses outmaneuveur repeatedly, while remaining loyal girlfriends to the end. 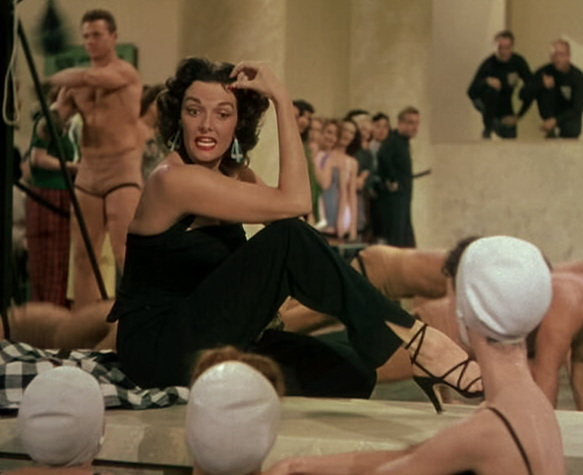 An appreciative audience of 2,000 at the Los Angeles Theatre howled at lines like this. And then drooled over high-fifties glam accessories like hats, gloves, handbags, shoes, ;blood-red fingernails, and of course diamonds.

Stand-out costumes include Jane Russell’s black halter-top/capri pant ensemble in which she struts her formidable stuff in “Ain’t There Anyone Here for Love?”.

And then there’s Monroe, wrapped like a loose burrito in a fuchsia sheath that stays up despite every law of gravity. Did they use glue? Surely the mother of all evening gowns! Rent this movie and start laughing out loud!

Like this? Read my 2009 Los Angeles Times article about how Jack Cole, the brilliant choreographer who staged the dance numbers in “Gentlemen,” coached Marilyn Monroe in this and five other movies.