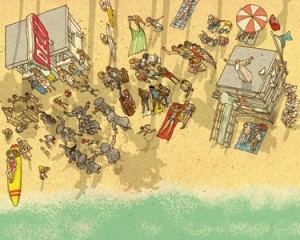 I immensely enjoyed Jewish Geography, the festival of ideas — and shmoozing — held on the UCLA campus Sunday.

The festival posed difficult questions that trouble diaspora Jews, especially we Americans who survived the genocide of Europe and who evade the current mess in Israel.

I most enjoyed the panel “Things Past: Memory & Space,” confronting such profound questions as:

Speaking to these issues was Peter Eisenman, architect of the Holocaust memorial in Berlin, who admitted to a fully secular and assimilated childhood with scant Jewish identity. (He grew up with Christmas trees, never hearing of Chanukah.) By the completion of his Berlin project (proper name: Memorial to the Murdered Jews of Europe), Eisenman had come to terms with being a Jew — a result that twenty years of psychoanalysis failed to achieve. In memorable dialogue with author Daniel Mendelsohn, Eisenman also admitted his ambivalence toward architectural preservation … saving buildings that have lost their original occupants (and thus their souls?). Given my involvement with architectural preservation, I find this idea very provocative. The context was Eisenman commenting on the usefulness, or lack thereof, of saving buildings commemorating where Jews had dwelled in Shanghai … during that wacky ten-year period in which 20,000 Jews lived in Shanghai in a transitional existence between war-torn Europe and the new world — the U.S. This spoke to me based on three early encounters with abandoned neighborhoods that formed my fascination with ghostly architecture:

The conference spent copious time exploring the notion that Jews are not people of “place,” but instead, people of time (evidence: predominance of the ritual calendar, focus on the weekly cycle around Shabbat, etc.).  That Jews, getting their tuchas kicked hither and yon, are “people of the book”, i.e., people of ideas; people who can get out of Dodge with a backpack on an hour’s notice.  The conference suggested that placelessness defines Jews. Israelis, of course, would disagree.