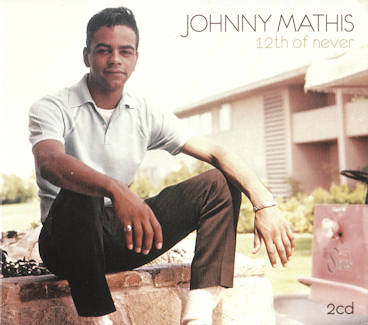 Then, John Waters, the witty, loquacious, and dapper film director, cited Mathis as one of his key “role models.” It happened at an ALOUD book talk last night.

After reading from his new book of the same name, Waters chatted with actress/author Carrie Fisher, who did her utmost to keep pace with his bombarding patter on life, career, and sexuality. Waters’s rap was laugh-out-loud hilarious, and the evening unexpectedly inspiring; the outre creator of “Hairspray” and “Pink Flamingos” came across not only as very smart, but as surprisingly kind and sensitive.

Speaking about Mathis, Waters said: “He’s the exact opposite of me, He’s so smooth, with that cashmere sweater draped around his shoulders. I visited him at his home. He had a book on the coffee table by Nixon,” Waters paused two beats for everyone to register how much his home library lacks such a tome.

Waters, who gains mileage … and material … from his Baltimore base, let drop that he likes to “live in a few places,” maintaining digs in Manhattan, San Francisco, and Provincetown. There, in myriad closets, hangs his considerable wardrobe by Comme des Garçons — he must be a paid spokesperson. In any case, the slender director looks fabulous.

“I think the U.S. should have a national make-out day. Everyone would listen to Johnny Mathis and make out,” he prattled, adding: “That would help a lot.”

Other Waters role models: Patty Hearst, everyone on the Howdy Doody Show, Patty McCormick (Rhoda in “The Bad Seed,” at left), his parents (“They were incredibly supportive. My mother drove me to a downtown Baltimore beatnik bar in 1957”), Tennessee Williams (“He saved my life, writing about a world of exotic people who didn’t fit in, and didn’t want to fit in.”)

The one sour note in a joyous evening was his advocacy for jailed Manson murderer Leslie Van Houton, whom he couches as a victim — of Manson and LSD. The Los Angeles audience wasn’t quite buying it but listened politely.

Altogether, John Waters rocks. The filmmaker-author (“I’m so tired of writing “cult filmmaker” on my IRS form,” he sighed.) gave generously of himself to an audience whom he described as “minority group members who don’t even fit in with their own minority group.”

And that made us laugh.