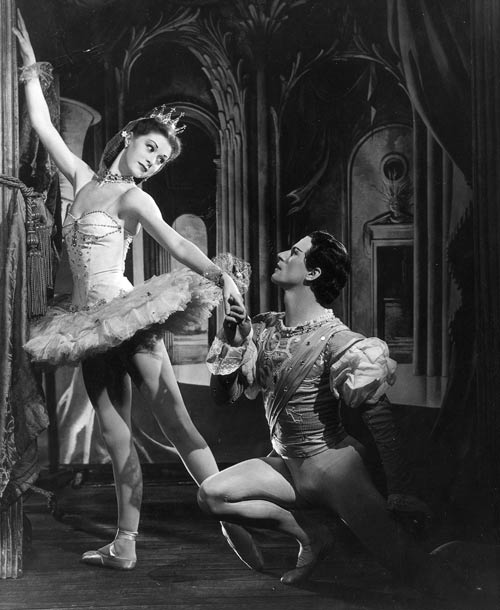 I’ve been researching “Cinderella,” Frederick Ashton’s fairy tale ballet for adults choreographed for Sadlers Wells Ballet (precursor to the Royal Ballet) based on Prokofiev’s score. The Joffrey Ballet is bringing its production of this gem to Los Angeles at the end of January.

“Cinderella” was the first full-evening ballet Ashton, or any British-born dance maker, created. He made the work on two women, a decision one of them, his muse Margot Fonteyn, found irksome.

Wendy Somes, the widow of Michael Somes (kneeling in photo, as Cinderella’s first Prince) told me in a phone interview that Ashton began by choreographing the kitchen scenes — in which Cindy is a dejected scrubmaid beholden to her vain and selfish stepsisters. These scenes were made on Fonteyn.

But Fonteyn got injured; she tore a ligament. Ashton continued work with her red-shoed colleague Moira Shearer. The result was the precise and vivacious second-act ballroom scene.

Connoisseurs can discern between the two sets of choreography, says Wendy Somes.

Fonteyn was still out of service when Shearer premiered the ballet on December 23, 1948.

[Lovely energy from Shearer in this still photo from Cinderella, at right, clickable.]

How long did Ashton take in creating this precious work of art? Including the change of his leading lady?

Recovering from her injury, Fonteyn stepped back into the role and made it her own. She was very believable as a poor, sad cinder-girl and who knows why, but she eclipsed Moira in the role.

I heard that this was hard on Moira. I found a touching obituary for Moira, who died in 2006. Read it here.

I’ve written before about Moira Shearer in “The Red Shoes”  and a film from 1953,  “The Story of Three Loves.”  She’s such a beautiful woman and she was a fetching dancer. Here’s to you, Moira Shearer.