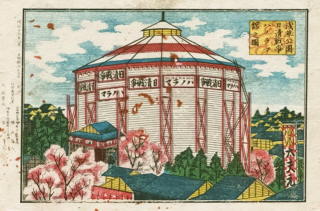 Dr. Kusahara discussed the  popular entertainment halls — called panorama-kan in Japanese. They were a “craze,” to borrow the lecturer’s expression, from 1890-1910.

Dozens of the rotundas sprang up all over Japan — in parks or on the grounds of Buddhist temples, as a means of pre-cinema popular entertainment. A lovely moment for painters, panoramas were in-the-round oil paintings, scenic tableaux, commonly depicting historical events. In Meiji-era Japan, Dr. Kusahara says, panoramas performed a propaganda function by inculcating the Japanese population in Western ideas and culture.

The most important Panorama-kan in Japan — the Nippon Panorama in Asakusa, Tokyo, built in 1890 — illustrated the Battle of Vicksburg scene from the Civil War. (General Grant was hot stuff in Japan in those days.) Other panoramas featured the Battle of Pyongyang (Sino-Japanese War) and the Battle of Port Arthur (Russo-Japanese War).  The profusion of western-style war scenes, Dr. Kusahara suggests, smoothed acceptance for Japan’s joining the coalition for the great European war of 1914.
At 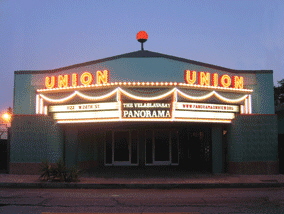 L.A.’s own panorama hall, Velaslavasay, the talented impresario Sara Velas has transformed an old movie house, the Union, into a pleasure dome for exhibiting the weird, kooky and sideways.

Climbing the spiral staircase to visit the 3-D panorama is de riguer. Now on view is “Effulgence of the North,” an Antarctic-inspired installed environment, replete with eerie lighting and ambient sound  … icebergs cracking apart … the honking of seals …genuinely cold and creepy. I find it kind of terrifying.

Dr. Kusahara, a collector as obsessed as many in her audience, is curating the upcoming UCLA show, “Gadget Okay.” The way-cool name makes us want to attend.