His birthday is over so it is back to business.

To admire the work of Jerome Robbins (he is currently being deified, similar to Balanchine) is to stumble upon his borrowings, and lack of crediting of others. This is so sensitive — and it’s a difficult-to-discern thin line of how the artistic process happens. Again and again, I see Robbins cross that line, insofar as he seems more than ‘influenced,’ but actually ‘taking from.’ It’s so pervasive that I find myself compelled to create a tag ‘Jerry Robbins borrowings.’

I am far from a Robbins expert, but I am deeply curious how Robbins morphed into the choreographer of West Side Story. I just don’t see how he did it. Has this been analyzed? 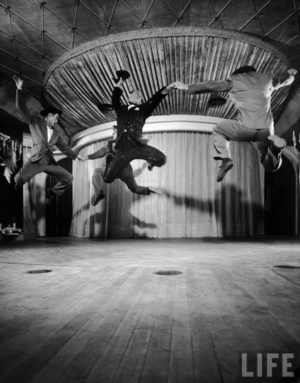 At top: Jack Cole dancer Buzz Miller in the ballet ‘La Chambre,’ choreography by Roland Petit. The year was 1955; at the time or certainly in the years leading up to ’55, Miller was lovers with Jerome Robbins. A lot of Robbins’ adoption (pilfering?) of Cole’s pioneering dance vocabulary came via Miller.

At side, an iconic photo of Cole choreography, in a tremendous shot by the great LIFE Magazine  photographer Gjon Mili from 1947. This is Jack Cole’s nightclub act, and that is Cole, in the black suit, at center. Note the men are holding hands! That is how incredible, precise and muscular was the Cole training.

Leaps are not uncommon in dance. They are ubiquitous. But Cole’s shapely pauses in the air, that he clearly passed to Buzz Miller, were pioneering. 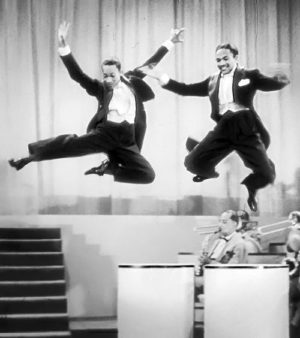 Let’s be clear: Cole got that vibe from acrobatic black dancers like the Nicholas Brothers. An absolute import, legs tucked under, with a difference; unlike Harold and Fayard, Cole’s arms are overhead, and his back is involved; it is in an arch. That is even more difficult to pull off. The involvement of the back reflects Cole’s whole-body orientation, as a former modern dancer.

Zoom ahead to circa 1958, see photo at bottom, as Robbins rehearses “Cool” for the stage version of West Side Story. That’s Robbins at center, and George Chakiris to his left — good god, with perfect placement George is out-jumping everyone in the shot. (Tony Mordente at the far end. This photo more than demonstrates the burning dance talent Chakiris had circa 1958.)

Robbins introduces a new, cool, version, because the arms and hands are down, snapping fingers.

Whether stolen, borrowed, influenced, or whatever, it is fun to trace the development of this rarefied dance vocabulary from the Nicholases to Jack Cole to Buzz Miller to Jerome Robbins. 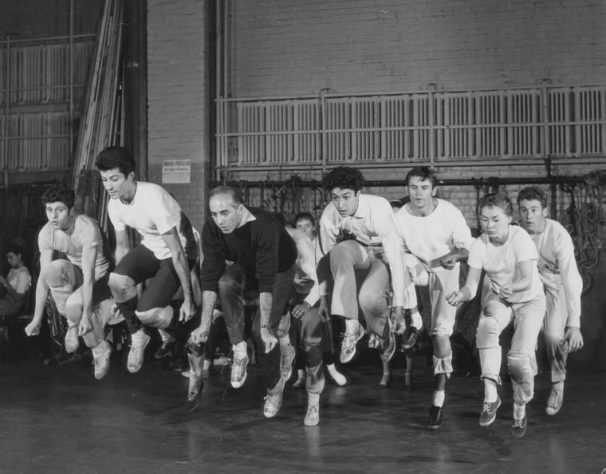