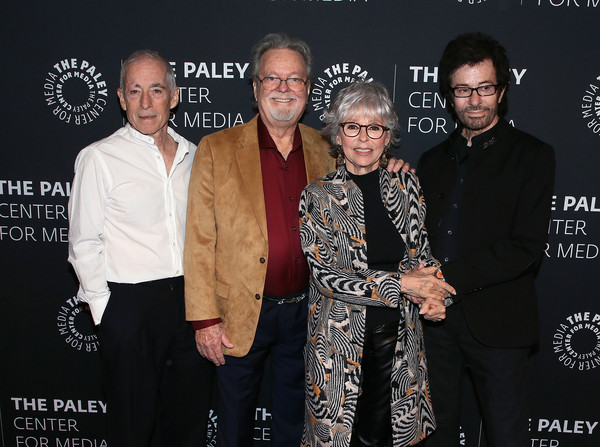 When was the last time a film clip got a standing ovation? Well, it happened last night. The audience at the Paley Center for Media in Beverly Hills erupted in appreciation after watching Rita Moreno and George Chakiris, on screen, kicking it to Leonard Bernstein’s thumping music and Stephen Sondheim’s wicked lyrics (all still ring dismally true) in “America.” 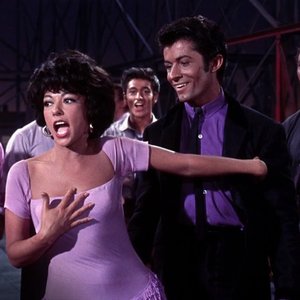 And there they were, sitting before us, Anita and Bernardo, in person. They stepped forward for a special bow.

Was there a choreographer on that sequence? You bet there was. And the Paley Center threw Jerome Robbins a big chat-and-clips party for his centenary birthday October 11. In attendance, a roster of ‘still kicking’ West Side Story A-team veterans.

The frothy, upfront discussion, regularly punctuated by fillips by the irrepressible Ms. Moreno, featured Eliot Feld (Baby John), Russ Tamblyn (Riff), Rita Moreno (Anita), and George Chakiris (Bernardo). It was moderated by director Rob Marshall — himself a veteran WSS gypsy-dance trouper who went on the record stating that “Cool” was the bomb and he would never miss dancing it, even with a cobbled knee. 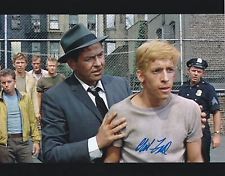 It was thrilling for Los Angeles to see Mr. Feld, who went on from his supporting role in ‘West Side’ to hone in on ballet work, and become one of the most important American ballet choreographers of the twentieth century. Feld noted that none of the intensity and sweat of “Cool” in the movie was staged; it was all real. He mentioned that the filming of that sequence was delayed while he suffered a stint in the hospital. Bronchitas.

Tamblyn, a marvelous raconteur, chimed in with dry wit about not really having been a trained dancer (he famously had acrobatic/tumbling skills), but explained that his exposure to Michael Kidd working on Seven Brides for Seven Brothers with the likes of cast members Marc Platt, Matt Mattox, Tommy Rall, and Jacques d’Amboise raised his game. He told a funny story that the scene in “Seven Brides” in which Jane Powell teaches the brothers to dance, he and Jeff Richards were the only ones credible as beginning dancers.

It was the first time I heard Rita Moreno own that she, too, was not a highly trained dancer at the time of her casting as Anita, but that she quickly burrowed down and signed up for every dance class in town.

Mr. Chakiris added his admiration for Tucker Smith’s performance in “Cool,” and also recognized Richard Beymer’s challenges playing in “Tony” under the direction of Robert Wise, whom Moreno noted, “was not an actor’s director.” Chakiris noted that the film opened a door to a career on a much higher level than his prior decade of being a chorus dancer in movie musicals. Chakiris staunchly defended Mr. Robbins, stating that in working closely with Jerry, he experienced nary a hiccup. He remembered Robbins, in fact, as being a quiet man, a description with which Marshall concurred.

Others had hiccups! Rita Moreno was a movie-musical newbie, an ingenue, when she worked for Robbins on “The King and I.” She described one of The Jer’s crueler, random attacks on a local chorus dancer. “Hey you,” Robbins pointed to a woman in the back row. “Are you wearing a girdle?” This could swing a few ways, but Moreno explained later that Robbins did not mean she needed one, rather that she was dancing like she was wearing one. Feld defended the master, saying, “I working with a lot of boring choreographers. With Jerry you were never bored.”

The panel was produced by Deborah M. Kaufman of the San Franciso-based “Words On Dance.” A beautiful evening. A love fest for West Side Story and its 100 year-old choreographer.