Osipova in premiere as Isadora Duncan at Segerstrom 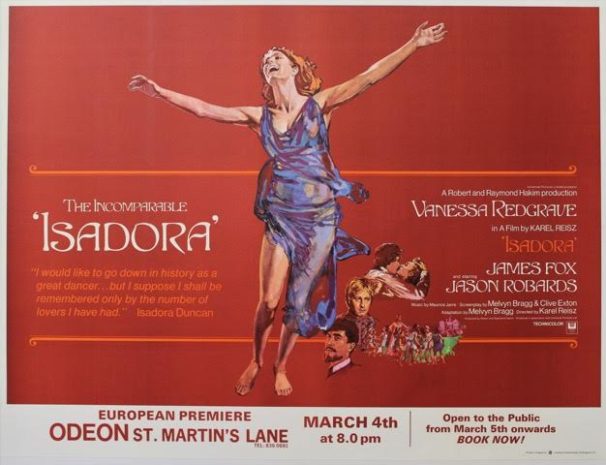 How will the California-born Isadora Duncan be remembered 50 years from now? As the woman whose barefoot, Greek-vase inspired abandon birthed the modern dance movement? Or for her shocking, free-love lifestyle in Europe and Russia and early tragic death – decapitated by scarf while riding in a Bugatti sports car?

To the uninitiated, and by today’s standards, her solos look almost quaint. So it’s no surprise that choreographers and film directors focus on her off-stage life and probably will for years to come. Duncan makes for titillating drama, if not commercial success. Several movies have been made about her life including director Ken Russell’s “Isadora” starring Vivien Pickles, in 1966, for the BBC. Then came the more familiar feature film, “Isadora” (a rare poster for it above, a studio-shortened version was released as “The Loves of Isadora”), which earned Vanessa Redgrave a Best Actress award at Cannes in 1969 and an Oscar nomination. 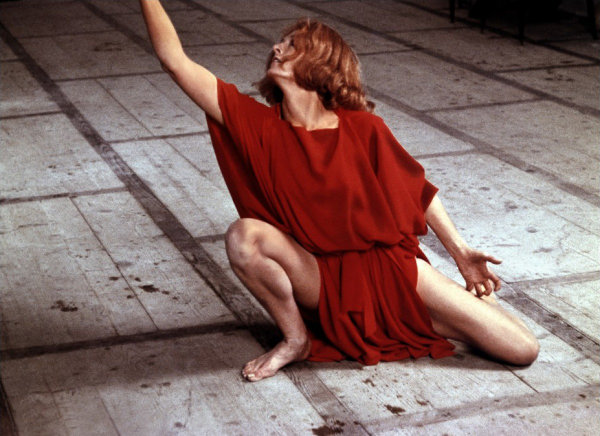 In 1977 the great Russian ballerina Maya Plisetskaya starred in Maurice Bejart’s well-received tribute to her, created for the Bolshoi. Sir Kenneth MacMillan’s full-length ballet “Isadora,” in 1981 was a miserable failure, as wrote Anna Kisselgoff in the New York Times:

”ISADORA,” a three-hour highly theatrical ballet by Kenneth MacMillan, is a deliberate distortion of Isadora Duncan’s life and art, and nothing would be easier than falling into the trap of being outraged by it.

Mr. MacMillan has merely done a Ken Russell on us. At Monday night’s American premiere with the Royal Ballet at the Metropolitan Opera House, it was obvious that ”Isadora” was really a padded-out series of simulated-sex duets between the Isadora figure and her lovers. The idea that an artist’s achievement can be illuminated by his or her private life is Mr. Russell’s favorite motif. As extreme and absurd as his films may be – one of his most absurd was about Isadora – Mr. Russell nonetheless manages to give us his own interestingly twisted interpretation of the figure in question.

The trouble with ”Isadora” is, despite all admirable appearances, its failure of nerve. Unlike Ken Russell, Mr. MacMillan never does get around to telling us what Isadora Duncan’s private life reveals about her art. There is no interpretation, only a comic strip. 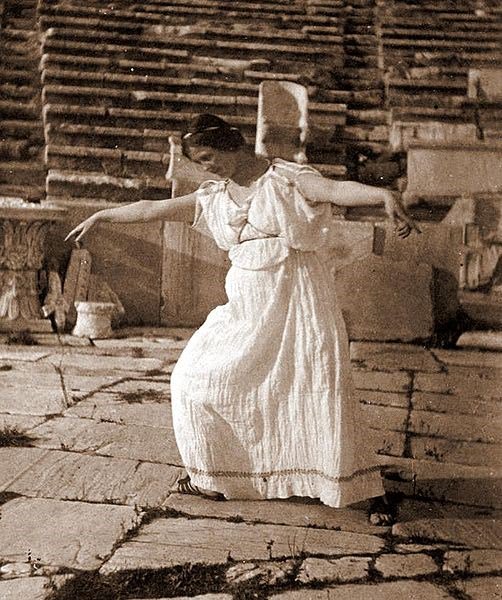 So is another Isadora ballet worth the risk? Impresario Sergei Danilian, who represents the many Russian artists presented by Segerstrom Center for the Arts in Costa Mesa, thinks so. His latest co-production with the Center is “Isadora: A Tribute to Isadora Duncan in Two Acts,” choreographed by the young, award-winning Russian, Vladimir Varnava.

Varnava claims to have seen both the MacMillan and Bejart versions, naturally on videotape as he is but 28 years old.

Here in Southern California we’ll see “Isadora” in its world premiere and the only performances of the work in the United States booked thus far. The highlight will be the glorious ballerina Natalia Osipova as Isadora, with Vladimir Dorokhin as her Russian lover, the poet Sergei Yesenin, and Veronika Part as “the Ballerina.” Duncan moved to Russia in 1921 enthralled, as many were at the time, by the idea of a new order emerging after the Russian Revolution. She opened a school there and later became a Russian citizen.

It was clear from watching Osipova and the pick-up company of 20 dancers in rehearsal recently that this is a highly theatrical piece, with acres of billowing red fabric, simulated sex and, Danilian told us proudly, a real Bugatti car on stage. In a press conference after rehearsal, Varnava made it very clear that he is not inspired by Boris Eifman (the love-him-or-hate-him choreographer who is also represented by Danilian), but his movement vocabulary is pointedly more Eifman than Duncan … or Ashton. Sir Frederick, that is, whose “Five Brahms Waltzes in the Manner of Isadora Duncan” hews closely to Duncan’s earthy simplicity. 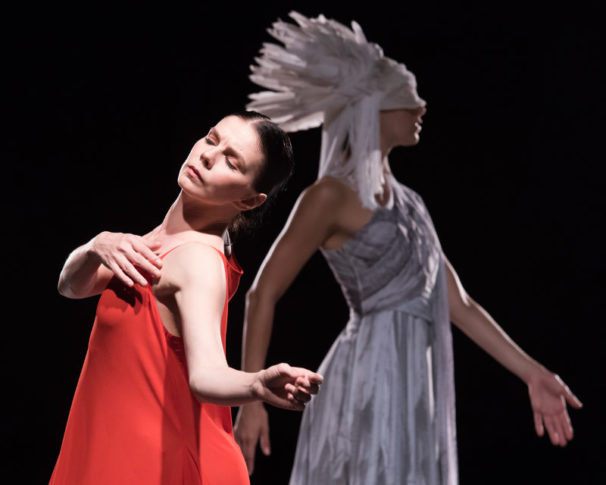 The much-loved Osipova, known for her heartrending Giselle, will no doubt carry the evening with her dazzling technique and immersion in the role. Osipova herself made the puzzling choice of music for her ballet – Prokofiev’s “Cinderella.” Program notes explain that the ballerina finds the “Cinderella theme of transformation not unlike that of Duncan and magic she performed on the world of dance” and “another story of a young woman who searches for beauty and sense of individuality amid tremendous tragedy.” It’s a stretch, but we’ll see what Varnava does with it. At least we’ll hear the score live – always a treat – courtesy of The Mikhailovsky Orchestra and conductor Pavel Sorokin.