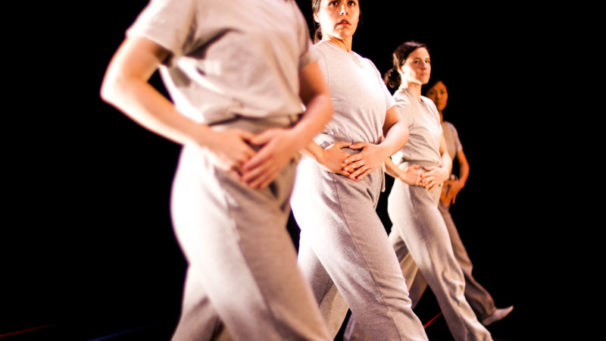 As a young woman in New York, I performed in the dance company of second-generation minimalist Grethe Holby, an alumnus of Laura Dean’s original spinning trio, and a dancer in “Einstein on the Beach,” choreographed by Lucinda Childs for Robert Wilson.

Pacing, walking, skipping and a lot of leaping and jumping: I’ve been there and done that. Thus I greeted Ms. Djordjevich’s update on obsessive marching patterns-as-dance (the reference, of course, Steve Reich’s “Drumming”) with skepticism these forty years later. What could possibly be new or unexplored in the genre? 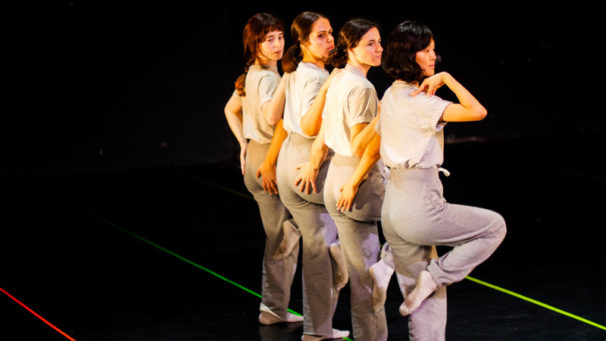 And yet, as the work for four woman bore on, it proved less than boring; it was distinctly stimulating. It won me over. In contrast to the taut gearing of early dance minimalism (think Laura Dean’s lovely white pajamas, think Lucinda Childs’s multicolored unitards), “CORPS” presented a schlumpy walking body dressed in bland attire — today’s anti-costume. The basic walking step was accented by the most flaccid of decoration — a random lift of the arm, or a rise of the foot to the knee, or an odd one, the tuchas grab, which brought to mind the uninvited pats received by #metoo ladies.

Chris Peck’s drumming soundscore had an equally ‘off,’ muted quality, far from the aggressive fusillade of a marching band. The nutty patterning for the dancers mirrored the score’s growing complexity.

Mental wear and tear often forms the crux of minimalist performance. How do they remember the interminable drills? Blank expressions masking determination lent “CORPS” its underground charm. Just as in watching a “real” drum corps (Ms. Djordjevich openly calls this her inspiration), you start to root for the home team. What they are doing is hard! A lot of backward stepping, a lot of directional swapping, a lot of arm entanglement, a lot of near bump-ins … but I never saw a misstep. Okay, maybe one. But hey.

Many of us are experiencing our era as barely beyond robotic, so enslaved we feel by the grip of technology. Djordjevich’s compulsory marchers illustrate that no matter how dogged the do-er, or oppressive the command, our humanity is impossible to squelch.

Work had an unfortunate “melt down” ending that should be amended. Otherwise, enjoyed immensely.