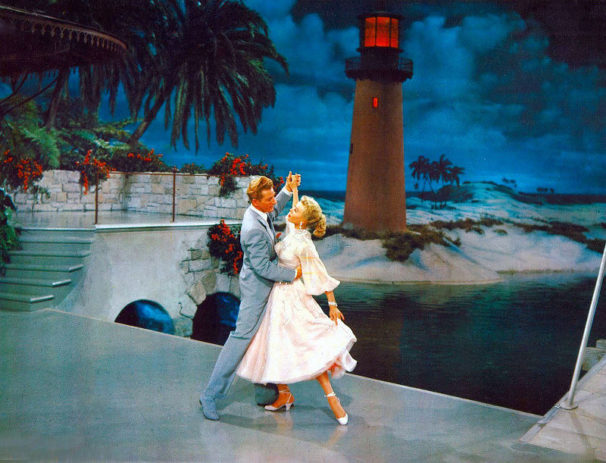 The lyric may be “iconic,” but it’s also “ironic.” Robert Alton’s sumptuous dance duet, “The Best Things Happen While You’re Dancing,” a classy, flowing number for Vera-Ellen and Danny Kaye, in White Christmas (1954) reveals the choreographer’s signature moves. Alton [Easter Parade, There’s No Business Like Show Business, White Christmas] could move bodies around a soundstage like no other — in solos, duets or in hordes as in the Finale of There’s No Business Like Show Business or “Mandy” in White Christmas. He loved whirling, swirling, movement, with velvety invisible transitions. He was a master of complex partnering including multiple turns, in place or in motion, and he loved to speed things up, double and triple timing tempi.”The Best Thing” transitions from Alton’s signature cheek-to-cheek waltzing to athletic tap to faux flamenco to aerial tricks, all using stage sets and props. It makes you really believe the lyric!

But the truth is, of the litany of personal injuries accrued during the making of this movie, some of the worst things happened while people were dancing. It was the dancers, exclusively, who checked into the Paramount Pictures hospital, not the actors. Even stars Danny Kaye (a non-dancer) and Vera-Ellen got whacked, hit, banged, and bruised, bumping into sets and suffering bad landings. Other dancers were snagged by stairs or costumes. Alton himself, while directing a number, smacked into a lighting device. Owww!!

PERSONAL INJURY REPORT – 10/9/53
Robert Alton, Dance-Director
While directing a rehearsal on the test stage, Mr. Alton stepped onto the set. The camera was moved into position – Mr. Alton bent down and when he straightened up struck his head on a camera light just above his left temple. A nurse came onto the set and treated him.

PERSONAL INJURY REPORT, 11-24-53
Les Clark, Dance-in, pay $150/week
Complained of sore, hoarse throat from singing and dancing in rehearsal of musical numbers — said he felt this condition coming on and getting worse for about 2 to 3 weeks before reporting to hospital

PERSONAL INJURY REPORT, 12-01-53
Vera Ellen, Actress
Rehearsing dance routine and slide on monorail with Danny Kaye, injured finger on right hand. Nothing known or reported on injury until reporting for recording 12-2-53 and reporting to hospital. Finger placed in splint by hospital at 11 a.m sent by car to have finger x-rayed. 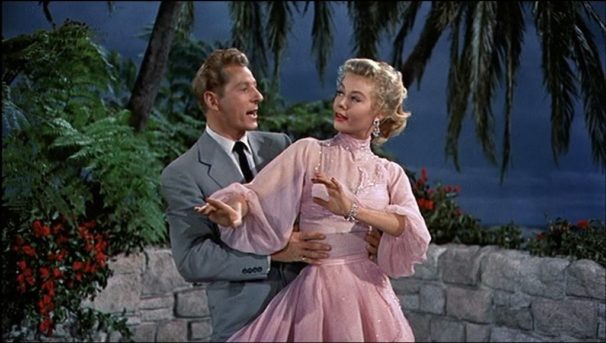 Addendum: artsmeme concurs with the Verdon Fosse Legacy’s assertion that Bob Fosse had no involvement — as dancer, choreographer, choreographer’s assistant, or dance-in — in White Christmas. The choreographer of that film, as stated above, was Robert Alton.