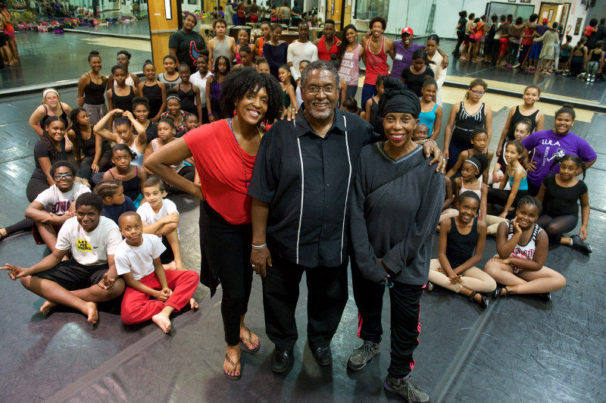 Editor’s note: In a story written for the upcoming conference of Dance/USA in Los Angeles, artsmeme’s Debra Levine profiled a beloved couple of the local dance community, Lula and Erwin Washington, who will receive the Champion Award on 6 June 2018. An excerpt from Debra’s story here:

What hath Lula and Erwin wrought? Consider a brightly colored circus tent. Beneath the big top sprawls a multifarious arts organization, a three-ringed spectacle encompassing dance education, a national/international touring company, and community outreach. At the sound of a drumroll, imagine a lady on the high wire taking a deep swan-dive into each arena. A handsome ringmaster catches her with aplomb. The tent represents the Crenshaw Boulevard edifice whose purple sign announces “Lula Washington Dance Theatre.” That swan-diver? None other than Lula Washington. That ringmaster? Steadfast Erwin Washington.

This eminent Los Angeles arts couple, married since 1970, shares nearly four decades as influential artists and educators; they are beloved figures, community leaders and role models, cornerstones of Los Angeles dance. The boy-girl couple who first started dating in the 11th grade are joint recipients of the 2018 Dance/USA Champion Award. The award, which recognizes outstanding dance leadership in the Annual Conference’s host city, will be bestowed at the conference opening dinner on June 6, 2018 in Los Angeles. It fits the Washingtons to a T. read more …

Read the entire story, “They Didn’t Have A Me” in From the Greenroom,  Dance/USA’s ejournal.