Terence Blanchard’s jazz message, in cabaret seating, at The Soraya

Trumpeter Terence Blanchard has been visiting this part of the country for years. Starting in the ’80s, he shared the valedictory frontline of Art Blakey’s Jazz Messengers with alto saxophonist Donald Harrison. Leaving the venerable drummer (“Our father, who art Blakey” quipped trumpeter Valery Ponomarev), Blanchard and Harrison co-led a good mainstream jazz band. They were part of the “young men in suits” wave of recording contracts and high-profile venue appearances in the wake of Wynton Marsalis (an earlier Blakey alumnus). Blanchard moved into the green pastures of soundtrack composing and recording prolifically for Spike Lee. 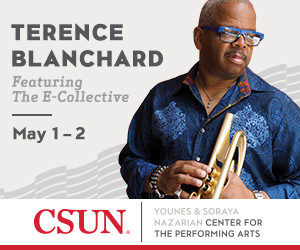 Blanchard has since become something of a social justice warrior with a horn, scoring for Lee in the 2009 HBO documentary on Hurricane Katrina, When the Levees Broke, and touring summer festivals with a band that fed “hands up, don’t shoot” to audiences. But provocative social statements can overshoot the mark. The Katrina doc contained the fraudulent theory that New Orleans levees were intentionally dynamited. Similarly, eyewitness testimony from the court hearings for the Michael Brown killing exposed the “hands up” narrative as a lie.

The music of Blanchard’s E-Collective Band, at the Younes and Soraya Nazarian Center for the Performing Arts (newly nicknamed as ‘The Soraya) Tuesday and Wednesday May 1 and 2, promises to center on the theme of police killings of black men. The trumpeter recently told Larry Blumenfeld of the Village Voice: “The rage builds up in you, and it comes out however it’s supposed to. I don’t even try to guide it. It’s not my responsibility. I’m tired of talking. It’s about action. This is my action. This is our action.” 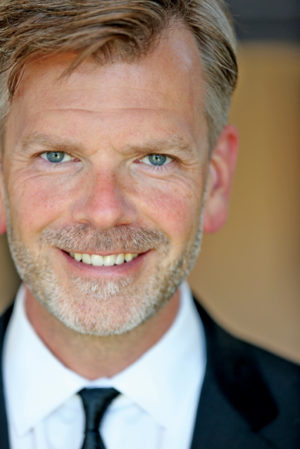 As paying audiences for jazz and new music presentations dwindle (Los Angeles proper is reduced to two full-time jazz clubs: Catalina’s and the Baked Potato), it’s a continuing challenge to bring listeners to the music. Thor Steingraber, The Soraya’s Executive Director, has gambled on creating a club-like setting for Blanchard’s two nights. “It’s something I thought about a couple of years ago,” he says, “and it represents our longest gestation process.”

An inveterate visitor to New York City, Steingraber hears the music in clubs and larger venues like Lincoln Center—always scouting for his own bookings. “The jazz artists travel with bands,” he points, “and I saw that trios and quartets were often lost in The Soraya auditorium. I thought we could provide a space that brings artists and listeners closer together—like what you have in a jazz club.”

It’s a bold move that entails tables and chairs on the stage, around the band, complete with food and drink. “We began this with singer Cécile McLorin Salvant and it went well — nothing but unequivocal raves.”

Steingraber admits that there are some problems with trying to create an intimate musical experience on a concert stage space, which is long and deep. “I want people to have a side-to-side experience with their neighbors in this club configuration,” he offers. “In recitals, they’re used to facing forward. They don’t always feel comfortable enough to walk to the bar and order a drink and pick out some food while the band is playing.’ 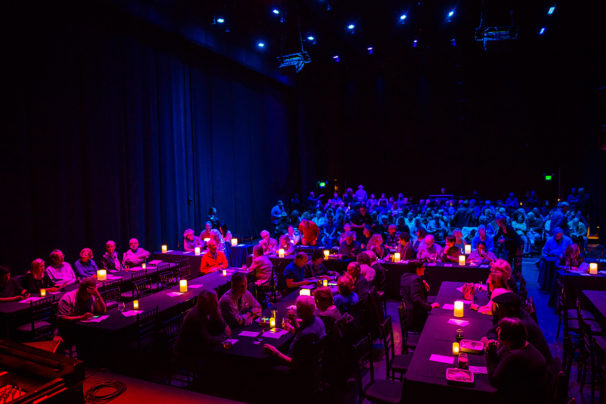 He’s hopeful, based on recent experience. “Cécile sold out,” he notes with pride. “But the balance of asses-in-the-seats versus presenting a creative musical experience is always delicate.” Not to be daunted, he excitedly relates: “Next year I’m bringing in Branford Marsalis, Vijay Iyer, Antonio Sanchez and the Wild Up collective.”

“The bottom line,” Steingraber asserts, “is we’re doing our best to try to build a long-term, sustainable audience for jazz.”

Terence Blanchard Featuring The E-Collective | The Soraya | May 1, 2