Our town and its city dwellers, by David Hockney @ LACMA 2 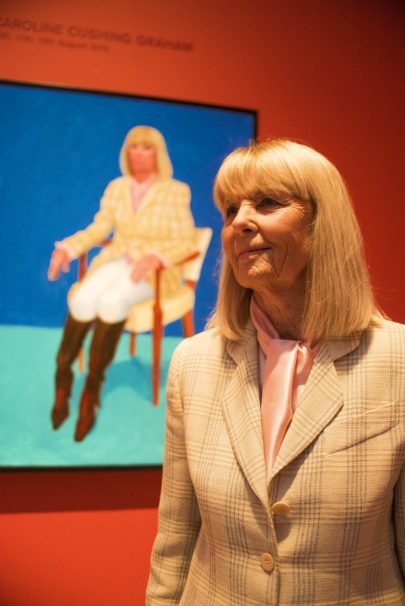 Friend of arts·meme, the arts publicist Caroline Graham, poses with her portrait painted by her long-time friend, the British-born artist David Hockney. Caroline’s likeness occupies a prominent corner of “82 Portraits and 1 Still Life,” the new Hockney exhibit at the Los Angeles County Museum of Art (LACMA). In the photo, Graham wears the elegant English fashion in which she was painted.

Hockney’s joyous show, a razzle-dazzle of color bathed in natural light from skylights, is installed on the top floor of LACMA’s BCAM Building. It is a huge output of labor, clearly a labor of love, by an artist in his latter years who plumbs the essence of the portrait genre.

“I’ve known David since I was the West Coast editor of Vanity Fair. I used to go up to the studio a lot to see what David was doing. We used to publish new works by him. Then I went to the New Yorker and Tina Brown, the editor, was very fond of David’s work. We published a lot of new work at the New Yorker as well.

Hockney, for forty years a Los Angeles resident, provides “an intimate view of the people who fill his world,” according to LACMA CEO Michael Govan giving remarks during a press preview. 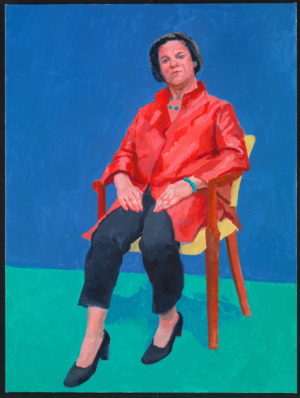 It comes in the nick of time. The eye-candy colors, pop-art replication, deadpan expressions, and quirks of dress, hair and posture feel light-hearted and fun. A sense of peace and connection — a notable lack of judgment — bonds artist (and viewer) to object. Says Govan, “It’s an exhibit to enjoy. It’s pure pleasure. It makes you happy.”

“It is a homecoming to show this work in Los Angeles where it was created,” he adds. The exhibition opened in London at the Royal Academy of Arts and traveled to Venice, Bilbao and Melbourne. It was organized by Stephanie Barron, LACMA’s senior curator of modern art, who also sat for the artist, and whose portrait in a loose red jacket is included in the show.

“It’s an amazing experience to be a sitter,” says Barron, “and to be exposed to such scrutiny.” Barron notes that in hanging the exhibition in two oversized galleries, “the spacing of the portraits took as much time as it usually takes to curate the works.” 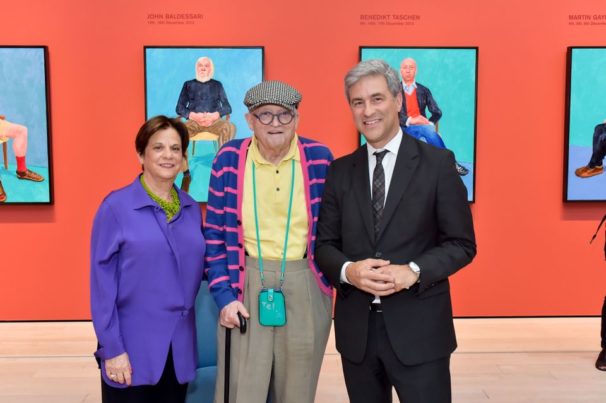 The 82 portraits, considered by Hockney as one body of work, were created between 2013 and 2016 in his Hollywood Hills studio. Each was painted in acrylic on a 48 by 36″ canvas; each was posed in the same yellow armchair with a blue background. The sittings each took three days to complete, with the sitter choosing his or her stance and fashion. None was commissioned. Amidst the wide-ranging physiognomy, the artist’s eagle-eyed consistency of size, proportion and placement on canvas lend this show particular delight.

2 thoughts on “Our town and its city dwellers, by David Hockney @ LACMA”