Michael Jackson could only spin to the left, said Donald McKayle

Chatting in 2011 with the great Tony Award-winning choreographer Donald McKayle (Raisin, Sophisticated Ladies, Dr. Jazz), who passed away just last week, McKayle let drop that he had worked with Michael Jackson on two occasions. And he remembered one funny detail.

“He taught himself to dance,” said McKayle. “He could spin only to the left.”

This got a chuckle from McKayle. Trained dancers, of course, in their classes, have to practice combinations and steps on both the left and right sides. But the autodidact Jackson was spared this discipline! 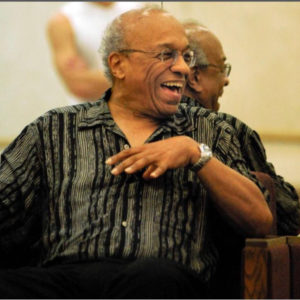 “I worked with him and his brothers on the Ed Sullivan Show. I worked [for Sullivan] filling in choreography if  acts showed up without their own.”

Pausing, then again laughing, McKayle added, “I did a lot in my career!”

“I also did a piece for [Michael] when he was 14. It was a song for a [television] special with Roberta Flack, Free to be You & Me. They were in the window seat of an old brown stone; we had a trampoline in there where they could bounce around. It was very sweet.”

At the time I spoke to Mr. McKayle, UC Irvine was planning an homage to establish a Donald McKayle Endowment Fund for Modern Dance. Unsure if this ever happened …