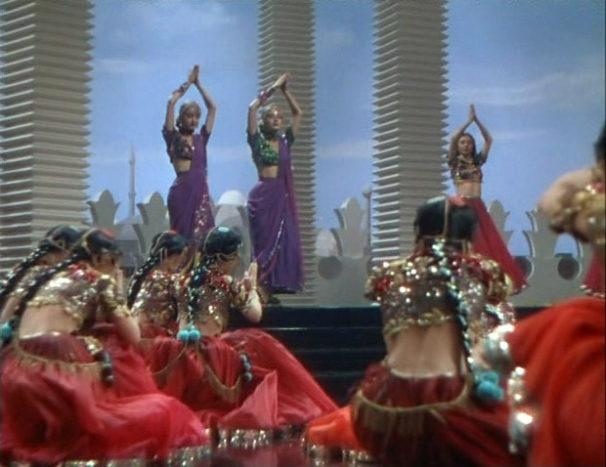 The choreographer Jack Cole is most known for his Oriental dance numbers in KISMET (MGM, 1955) directed by Vincente Minnelli. But a decade prior, also at MGM, Cole choreographed KISMET (1944) starring the non-dancer, Marlene Dietrich.

Dancer/ballet instructor Joan Bayley, who went on to become choreographer’s assistant to Robert Alton, auditioned for Cole as a harem dancer for this film.

Joan and her friend dancer Freda Flier (the two were ballet students of Carmelita Maracci) bobbled their heads from side to side like Indian dancing girls — and didn’t know when to stop.

Cole’s dance sequence, below, is a real hokum of smoke, mirrors and body doubling that only MGM had the chutzpah to pull off. Dietrich, who could not dance to save her life, contributed her famous gams.

Dietrich dance costume by Irene, with input from Barbara Karinska.