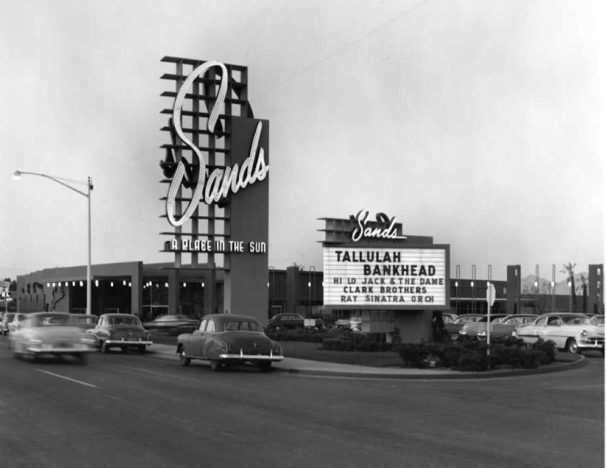 According to author Lynn Zook, who has written two cultural histories of the Las Vegas Strip, the Sands Hotel came to symbolize the Las Vegas of our collective memory. It was here that the color line was broken; here that Sinatra, Martin, Davis and the rest of the Rat Pack held court in the Copa Room; here that JFK visited during a campaign trip through Southern Nevada.

arts•meme is pleased to share an except from Zook’s Gambling on a Dream: The Classic Las Vegas Strip 1930-1955.

The Sands Hotel opened on Dec. 15th, 1952. Danny Thomas, singer/songwriter Jimmy McHugh and the Copa Girls (“the most beautiful girls in the world”) opened the famed Copa Room.

Ray Sinatra and his Orchestra were the house musicians, and the Copa Room had seating for 395 and featured a series of nine sculptured metal Brazilian carnival ﬁgures.

By the second night of his two-week run, Thomas, overwhelmed by all the press coverage and unaccustomed to such attention, had strained his voice and his doctor told him to take the night off if he wanted to be able to continue his gig. A call went out and, in that old standard of Hollywood and Broadway, the show went on starring a hastily gathered group that included Jimmy Durante, the Ritz Brothers, Frankie Laine, Jane Powell and Ray Anthony. It was, by press accounts of the evening a wild, free-wheeling ad-libbed show that brought the house down. All the performers would ultimately play the Strip throughout the 1950s. 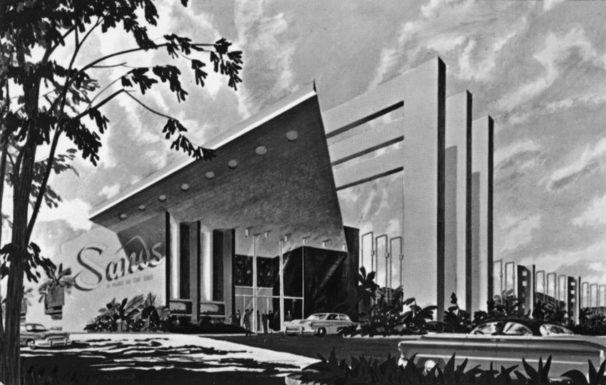 Sands Head of Publicity Al Freeman wooed Louella Parsons, Bob Considine and Earl Wilson to broadcast their radio shows from the Sands a few times a year. He invited atomic scientists and doctors to stay at the Sands during the atomic bomb tests that were routinely going oﬀ in the early morning desert skies above Yucca Flats. He wooed celebrities, dignitaries and politicians. He worked closely with the photographers at the Las Vegas News Bureau to keep the Sands in the forefront of publicity.

True to the mad‐cap spirit of the day, Freeman put a craps table in the pool. Don English, of the Las Vegas News Bureau, snapped the photograph of gamblers in swimming suits and Hawaiian shirts playing craps in the pool. Guys and Dolls was a smash on Broadway and one of the favorite songs from the musical concerned a ﬂoating crap game. Freeman was a master at his job and raised the bar for all the other publicity directors in town.