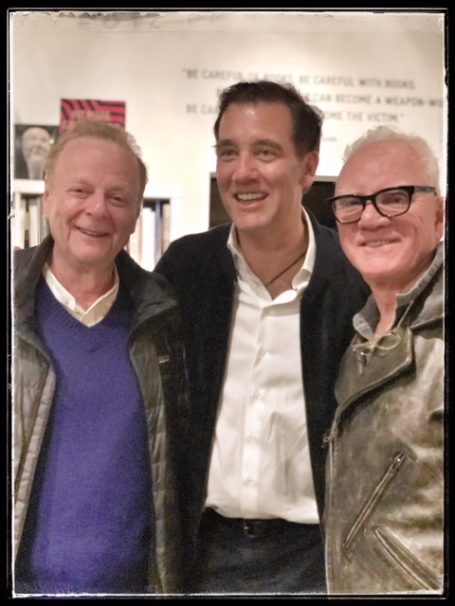 Among the mavens who came out to celebrate “The Art of the Movie Poster: HIghlights from the Mike Kaplan Collection,” newly opened at LACMA, were several prominent ones cheering on their friend, Kaplan (at left).

At right, the estimable Malcolm McDowell, whose association and friendship with Kaplan has Stanley Kubrick at its heart. (As a film marketing executive, Kaplan was involved in the marketing and poster design for Kubrick’s 2001: A Space Odyssey(1970) and A Clockwork Orange (1971).)

A fellow Briton, Clive Owen, gave generous comments that noted Kaplan’s efforts on behalf for one of the actor’s early projects, Croupier (1998). Remarkably the jam-packed reception also included a bunch of Croupier fans! 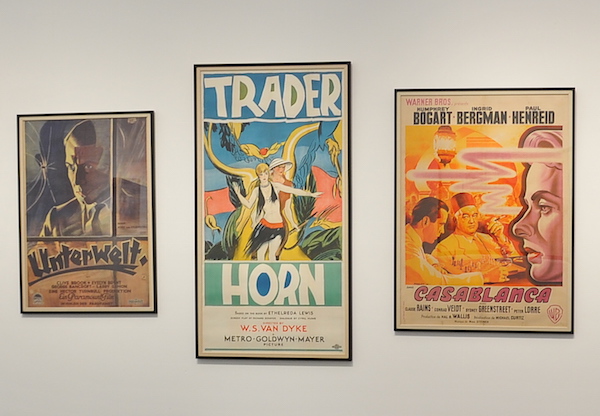 In a pleasantly informative q/a ably conducted by L.A. Times film critic Kenneth Turan, Kaplan skated through the many perimeters that have guided his self-admitted addiction to the beauty and impact of movie posters. His need to collect rectangular objects dates to his taking scissors to Al Hirschfeld’s Sunday New York Times Arts & Leisure cartoons over the decades. A big stack of paper! Kaplan has long contended that the movie poster, a highly particular form of commercial art, in its focused mission of conveying disparate information to maximum effect also contains the defining elements of fine art.

In hanging this show, the County Museum is shoring up that very idea and enriching LACMA CEO Michael Govan’s planting the flag for film as an intrinsically Los Angeles art form at the museum. Many in the house expressed the desire to keep the collection, which is studded with international posters all pointing back to Los Angeles, here at home.

Wrote Kaplan in an email,

I want to thank LACMA director Michael Govan, whose enthusiasm was evident when he raised the potential for another event timed to the second poster installation in May. Great friends Malcolm and Kelley McDowell were there, and suddenly Clive Owen, a pal since Croupier, appeared with a smile on his face. A fellow poster aficionado, he flew in from Savannah where he’s filming with Ang Lee. Having Kenny Turan moderate, so articulate and appreciative of the movie posters, and the hosting by Dagny Corcoran, whose ART CATALOGUES bookstore is its own oasis at LACMA, made it a great event.

The Art of the Movie Poster: Highlights from the Mike Kaplan Collection | Ahmanson Building | LACMA  | thru July 1.