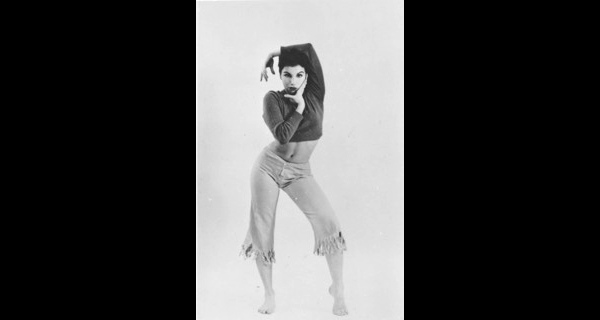 You all remember when Harry met Sally. But what about when Sally (Goldin) gave Marilyn (Monroe) her pair of jazz pants?

This happened! A jaw-dropping moment when Sally Goldin told me, “I gave Marilyn a pair of my jazz pants.”

“Oh, yes,” shot Sally right back. “She admired them at Frank Wagner‘s class. She was so shy and sweet and worked very hard in that class.”

You were in dance class with MM? I ventured the question, trying hard to pretend this was all very normal.

“She just came up to me and said she loved them. I had an extra pair so I gave them to her. The pants were $6. They were the RAGE back then. We bought “sailor pants” at the army/navy store. They had laces up the front we cut the bell bottoms to length and fringed them. They came up just under the belly button VERY SEXY for the day!!”

Right. The army/navy store. Uh, did Double-M wear them?

“Yes she wore them to all the classes, even though they were a bit short for her.”

Sally Goldin, whose professional name was Sally Wile, was a Broadway dancer who worked for Fosse, Charles Weidman, and Jack Cole dancer Bob Hamilton. She danced in film and television in the U.S. and in Europe. Sally currently teaches four ballet classes a week at Lake Arrowhead School of Dance in the mountains east of Los Angeles.

Mention Frank Wagner to a dancer friend and you’re apt to be told that he gives the best modern jazz class. Go to one of his many beginners’ classes at the International Dance Group, Studio 819, Carnegie Hall, 154 West 57th Street (CI 7-6056, CO 5- 9090) and you’ll probably find yourself standing next to a professional… 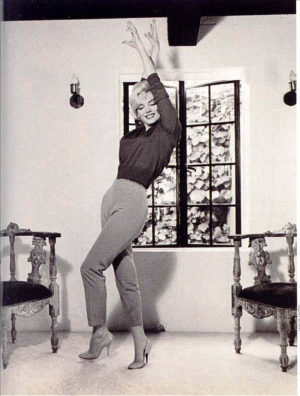 According to Sally, Wagner’s studio was in Carnegie Hall.

“He wasn’t the best teacher. That was the same time as Peter Gennaro, Arlie Peterson and Matt Mattox – who were my favorites. Marilyn went there.

Frank had some great drummers. Steve McQueen and Brando came and drummed sometimes. That was the time Carmen Alvaraz was in class. And of course Chita.”

The small photo of Sally Goldin posing rather fetchingly in her jazz pants, above, was part of a “composite” — a one-sheet that dancers, back in the day, took to auditions. “I think I’m about 17 in that photo … 1952, ‘53. I was at the Performing Arts High School.”

5 thoughts on “When Sally gave Marilyn (Monroe) her jazz pants”