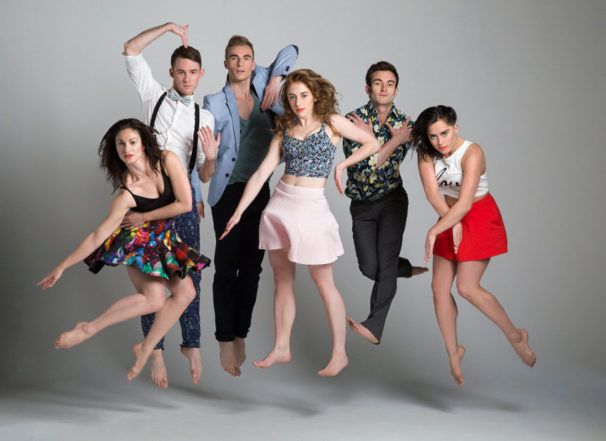 Not one, but two, sweet-hearted, newly commissioned dance works by choreographer Larry Keigwin for his charming and excellent dance troupe, Keigwin + Company, had world premieres tonight in the classy, comfortable, and elegant Younes and Soraya Nazarian Center for the Performing Arts (The Soraya), formerly the Valley Performing Arts Center.

The commissions came as part of The Soraya’s multiple offerings for Bernstein at 100!, the two-year-running centenary celebration of Lenny-the-Great, the uber-talented composer-conductor who swung both high and low, and died in 1990. The Bernstein canon of dance music, which reached its apex with West Side Story, has now been officially extended, courtesy of The Soraya’s executive director Thor Steingraber, the music-maven who initiated the commissions.

Of the two works (both enjoyed highly competent, on-stage accompaniment), the lovelier was “Sonata,” an extended pas de deux set to Bernstein’s Sonata for Clarinet and Piano. The music, composed by Bernstein at the dewy age of 23, gave marvelous underpinning to Keigwin’s choreography which followed its ebbs, flows and arpeggios with wit and considerable humanity. Brandon Coleman, in brown trousers and white shirt, dance-talked to his partner Emily Schoen, in perky white skirt and midriff-baring top. It felt like a relationship conversation, something intimate, akin to what we regularly view, now, on television series like “The Affair.” The two circle each other, push, pull, and poke with taffy softness, and then face off, so that their arms, stabbing in semiphores, can further the chatter. They then hurtle into little stag leaps like elk. Push-y, pull-y, their swinging arms topple their bodies. Then they recover. It’s all calm and clean and readable, but also romantic in a highly contained way. I feel that Keigwin has created, in “Sonata,” a stellar swathe of choreography. 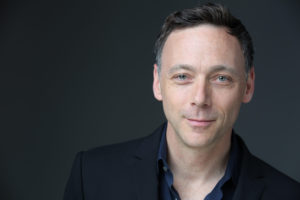 Less so was the second commission of the evening, “Three Plus One,” which earned credit for attempting a kind of Keystone Kops comedy. A foursome, arms entwined, bluster their way through a dotty Bernstein score, perhaps its on-again, off-again-ness related to his having composed it at age 19. Just a thought, but maybe this work could make use of sets or props, as a sameness of movement kicked in despite the sight gag of one big-boned dancer in contrast to three (smaller) collaborators.

The beautiful evening program, one hour plus in length, was rounded off by two prior Keigwin gos at Bernstein scores. Dating from 2014 was “Episodes” performed to the “On the Town Suite,” channeling but not aping the iconic Gene Kelly/Stanley Donen cine-choreography to the same music. It was lovely. Delicious. Happy. Sane. Everything the world isn’t anymore. And speaking of cinema, “Waterfront” to the “On the Waterfront Suite,” closed the program resoundingly, a study in contrasts in which the white-costumed dancers, amidst a blackened stage, rode the waves of this most anguished of film scores, and Keigwin removed the restraints and allowed searing emotion charge through the body. One could not but notice the dancers’ heightened emotion, and for this misty-eyed viewer, the ghosts of Brando, Kazan, Karl Malden, and the wonderful flute motif that evokes Eva Marie Saint, bounced with fulsome reverb around the room.