Before Tonya Harding, there was Vera Hruba Ralston 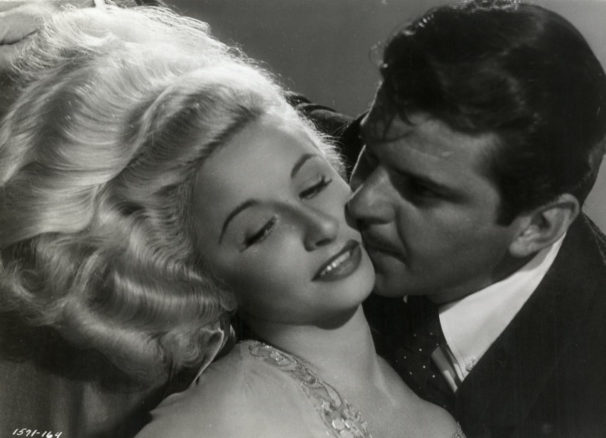 John Carroll plots to relieve his brother (Robert Paige) of his inheritance, with the help of femme fatale Vera Ralston and some extravagant noir stylings from director John H. Auer.

Every bleach-and-perm man in the San Fernando Valley was in high gear, in 1947, prepping Czech-born ice-skating star-cum-movie actress, Vera Hruba Ralston (above, with John Carroll) for her starring role in The Flame.

The film is featured in “Martin Scorsese Presents Republic Rediscovered: New Restorations from Paramount Pictures,” which opens tonight at the Museum of Modern Art, and then has a second edition in August. As Vera Hruba (pronounced roo-bah), Ralston was a featured attraction with the Ice Capades when she caught the attention of Herbert J. Yates, the head of B-movie house, Republic Pictures. He not only primped her hair, he tried his level best to quash her Czech accent — to no avail.

Starting in 1941, Yates featured Ralston in Ice-Capades, a musical built around their skating acts. Soon followed Ice-Capades Revue. As Republic’s answer to 20th Century Fox’s Olympic gold medalist-turned actress Sonja Henie, the studio’s new discovery was promoted for having “skated out of Czechoslovakia into the hearts of America.”

In 1943, Ralston signed a long-term contract with Republic, and then ascended to being Yates’s wife. Four Ralston movies are included in MoMA’s Republic retro-roster.

The 30-film series is being undertaken as a joint presentation of Paramount Pictures and The Film Foundation, headed by director Martin Scorsese. In a statement, Scorsese said,

“From the ’30s through the ’50s, the different studio logos at the head of every picture carried their own associations and expectations, For me, the name Republic over the eagle on the mountain peak meant something special.

Republic Pictures was what was known as a ‘poverty row’ studio, but what their pictures lacked in resources and prestige they made up for in inventiveness, surprise, and, in certain cases, true innovation. Among the many ‘B’ pictures produced at Republic, there are many titles that have been overlooked or forgotten. I’m truly excited that MoMA will be presenting 30 of these films, some in newly restored versions courtesy of Paramount Pictures and The Film Foundation.”