My father John Garfield: a portrait by Julie Garfield 7 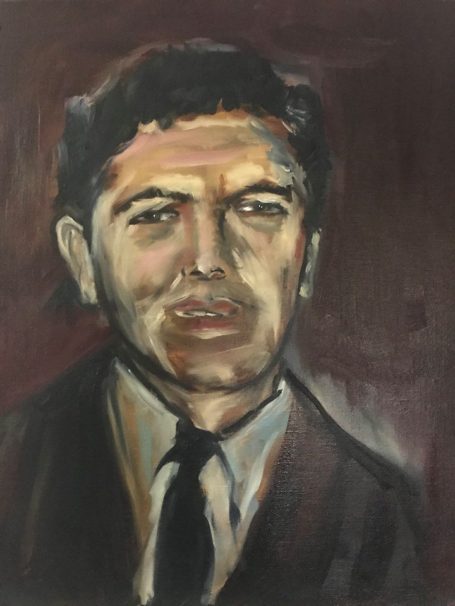 This wrenching portrait of actor John Garfield recently won a ‘red dot’ award at The Art Students League. The facial expression is imagined — as the artist Julie Garfield has only distant and vague memories of her father. He perished when she was just six years old. John Garfield, who was hounded by HUAC and a prime victim of the Hollywood Black List, died at 39.

Garfield was a sensational film and theatrical actor, tapping a huge range of capability. The camera loved his liquid eyes. He was a great screen lover; he had a frightening way with anger; and he evinced tenderness and compassion. He echoed the Warner Bros house-style of rat-a-tat-tat text delivery, but his facility had particular punch having been steeped in works of Clifford Odets at the Group Theater. We so enjoyed his masterly performance co-starring with Patricia Neal in The Breaking Point as part of the launch of a new biography of Michael Curtiz, the film’s director.

We also supported Julie Garfield’s public cry to the Trump administration to halt its reckless use of the expression, “witch hunt.”

7 thoughts on “My father John Garfield: a portrait by Julie Garfield”