Cuban music has tantalized and insinuated itself into the United States since the 19th Century. New Orleans-born composer Louis Moreau Gottschalk (1829-1869) was smitten with the Cuban tresillo, cinquillo and habanera, and incorporated those elements into his compositions. Ragtime pianists were subsequently taken with what Jelly Roll Morton called “the Spanish tinge.” Then came the rhumba, the cha-cha and the mambo, successively taking American dance floors by storm.

“What connects people from all over the world to Cuban music,” explains Juan de Marcos, “is the groove, the clave,” citing the rhythmic patterns of Afro-Cuban music. 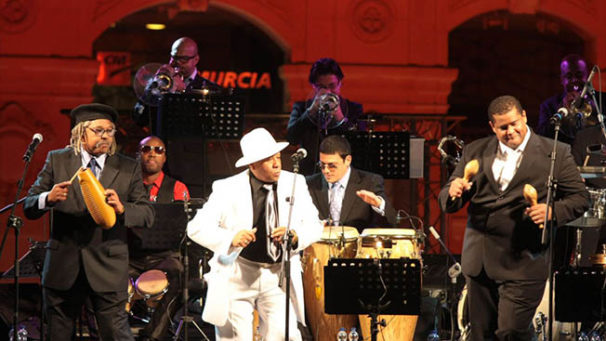 Angelenos who have attended concerts featuring the stars of the Buena Vista Social Club have seen de Marcos, the straw-boss of the band. “Royce Hall, the Hollywood Bowl, the Conga Room,” the 63-year old de Marcos ticks off, “we’ve played them all.” On January 19, he leads his Afro-Cuban All-Stars at the Younes and Soraya Nazarian Center for the Performing Arts — also known as The Soraya, the former Valley Performing Arts Center.


He played the tres guitar in Sierra Maestra, placing de Marcos on the ground floor of the Buena Vista phenomenon. “In 1994,” he recounts from his home in Maryland, “we recorded a tribute to Arsenio Rodriguez, Dundunbanza! (World Circuit) — and it’s still selling.”

Rodriguez (1911-1970) was the tremendously influential Cuban composer and bandleader who introduced the son montuno form, the fundament of today’s salsa music, and according to de Marcos, “the basis of everything you hear now.

“He was my idol.” says de Marcos. “Arsenio is unquestionably the most important Cuban composer of the 20th century. He’s like the Cuban Charlie Parker: he established the entire foundation for the future. We’ll play one of Arsenio’s songs at The Soraya.”

De Marcos grew up in downtown Havana, a hotbed for musicians, including conguero Chano Pozo (1915-1948), who infused the Dizzy Gillespie Big band with Afro-Cuban rhythms. “My daddy knew Chano,” says de Marcos. “He lived a hundred yards from my home.”

As the BVSC stars have passed away, de Marcos knew that the band was too important not to keep going. “We’ve kept the Cuban big band sound of the golden ‘50s,” he says. “But our soloists are improvising in modern ways.  We have serious jazz players and soneros.”

He’s looking forward to playing in the acoustically precise The Soraya. “It’s always difficult to lead a big band in a symphonic space,” de Marcos says adding, “we can’t play too loud.”

Despite the band’s strong identification with all things Cuban, de Marcos has streaked the band with players from unlikely countries. “I like to incorporate people from different parts of the world into the band. We have had musicians from the U.S., Mexico, Sweden and Germany in the Afro-Cuban All-Stars. Of course they are all very fine musicians who can play our music. We never lose the Cuba in the band’s music.”

A nice programming touch will see pianist Harold Lopez Nussa, a Havana resident, opening for the Afro-Cuban All Stars.

In conversation, the subject of the Cuban revolution inevitably comes up.

Notes de Marco, “We lost the possibility of distributing our music to the world through America. So we lost the ability to distribute the Cuban music styles that came after 1960,” he explains.

However, he concludes, “We’re a very small country. We don’t have oil, gold or any natural resources. But we have influenced the whole world through our music.”