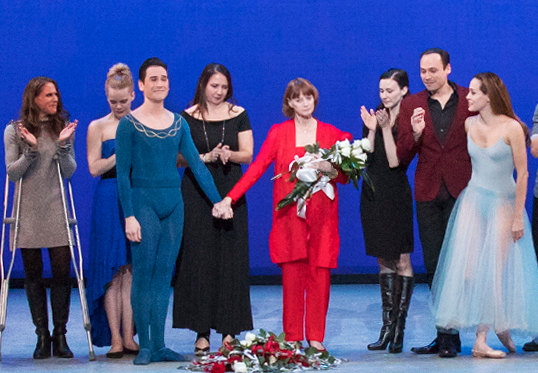 The repertory for “Forever Balanchine” – the final, bittersweet four-performance season of The Suzanne Farrell Ballet – resonated deeply and on many levels. At the Saturday matinee (the same program as Thursday’s opening night, but with cast changes), ballets I had taken for granted, or thought I had investigated thoroughly, brimmed with new insights and possibilities.

Farrell’s company, supported by (and in residence almost annually at) The Kennedy Center for the Performing Arts, has achieved a great deal despite never having become a full-time venture. Its limited, infrequent touring included New York City (though never in a sizable venue) and Los Angeles, in 2003 at Royce Hall.

Reuniting her dancers – some with longstanding tenure, others new – for several months each year, Farrell presented thoughtfully designed programs primarily focused on the Balanchine choreography that was so integral to her own career and which she is so passionately devoted to sharing with new generations of dancers. She included some Robbins and Bejart works at various times in the company’s 17-year existence, but her penetrating insights – interpretive and musical – about her mentor’s rich repertoire were always the essence of this troupe. 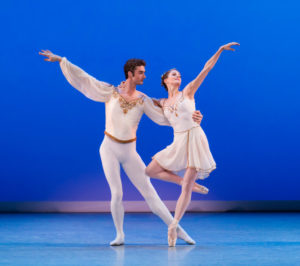 Chaconne, the 1976 ballet that opened the program, felt refreshed and full of sweet surprises in Farrell’s staging. The series of divertissements leading up to the main couple’s duet and variations proceeded with newly logical succession. I was astonished at the expansiveness and refinement of the female quintet that I’d often considered something to sit through while anticipating the main event. What had often seemed perky and sweet was now fascinating in its geometrical intricacy. Elizabeth Holowchuk as the central woman here was luxury casting, with her bracing clarity.

There were a few unsteady partnering moments for the central couple, Heather Ogden and Thomas Garrett, and he is not ideally suited for the virtuosic male variations designed for Peter Martins’ plush ballon and bravura precision. But Ogden rode the music with beautiful expansiveness and quiet joy in her variations. One could sense how Farrell had communicated the daring, wit and grandeur of this remarkable role and emboldened Odgen to fly with it.

The two works paired for the program’s central portion are more intimate ones Balanchine created for Farrell at significant points moments in their collaboration. Meditation, set to Tchaikovsky’s deeply romantic composition, a section of Souvenir d’un Lieu Cher, marked the first time he choreographed a work for Farrell, then 18 years old. Tzigane, set to another composition featuring the violin, by Ravel, was her welcome-back gift when she returned to New York City Ballet in 1975, after her stint with Maurice Bejart’s company.

These two works – one for the dewy young ballerina on the verge of a great career, the other for a mature interpreter returning to home turf after performing more dramatic, less subtle European works – make a fascinating pairing. Farrell’s potent and enduring interpretations remain vivid, but she has encouraged her ballerinas to find their own way into the roles by passing on her own insights and knowledge of Balanchine’s intentions. 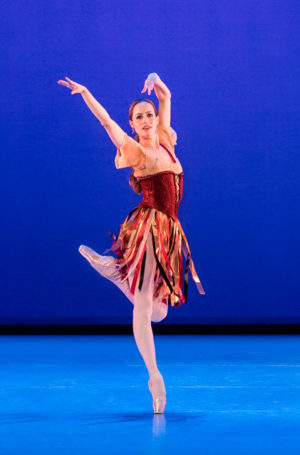 Allynne Noelle in Tzigane didn’t evoke the teasing dramatic intensity that Farrell brought to the role, but though her performance was more studied and less spontaneous, she shaped the extended solo with intense focus. Her sensuous, powerfully wielded legs delivered their own drama. She seemed to conjure Michael Cook into existence, and their connection was immediate and playfully witty.

This performance of a ballet I’d usually just tolerated in the past impressed with how brilliantly Balanchine heard the music and its expanding power. The sudden appearance of the man, and soon after that of four couples, feels so inevitable and right. Holly Hynes’ costumes, with the man and ensembleall in shades of rust and brown, drew on the originals but were more harmonious and less kitschy.

Natalia Magnicaballi (one of Farrell’s most longstanding and devoted lead dancers), with her limpid fluidity, and Kirk Henning brought wistful intensity and just the right impassioned fervor to Meditation. It’s a slight but evocative work, one that poignantly encapsulates the moment when a creative master and his muse first connected.

Farrell’s company first performed Gounod Symphony, a 1958 work she had never danced but had previously staged for the School of American Ballet, last year. Boldly re-imagined costumes (by Hynes) alter the palette and silhouette of the 20 women of the ensemble. Chic and mid-century modern, with half the 20 women in black and half in white, they remove the flowers-in-a-garden associations, and allow appreciation for the endlessly kaleidoscopic patterns that they and the ten men deliver in the outer movements.

The central couple’s extended duet in the second movement is both stately and elegiac. They’re drawn close together yet always seem on the verge of being pulled apart. Magnicaballi and Cook seemed slightly reserved at times, but make an eloquent pair.

The otherwise excellent playing of the Kennedy Center Opera House Orchestra did not attain the same level in the Gounod; sounding thin and not as confident or crisp.

Farrell, who is in every sense a non-diva, did take a bow at this matinee, as she did at each performance. The curtain call provided a welcome opportunity to acknowledge her generosity and devotion to this 17-year venture and achievement in staging such illuminating productions of Balanchine works, both familiar and rare.

Susan Reiter covers dance for TDF Stages and contributes to the Los Angeles Times, Playbill and other publications.

One comment on “REVIEW: The Suzanne Farrell Ballet’s farewell bid @ The Kennedy Center”