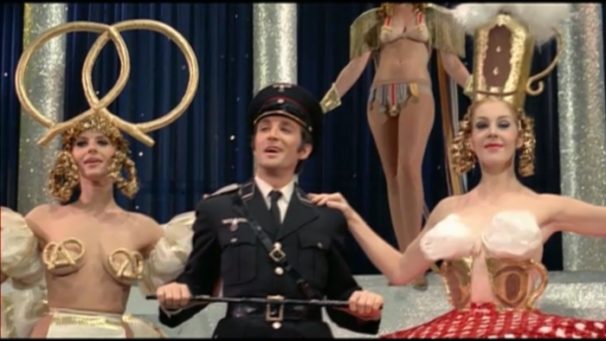 Sunday evening I attended a career retrospective of the great choreographer, Alan Johnson, held at the Paley Center for Media in Beverly Hills. 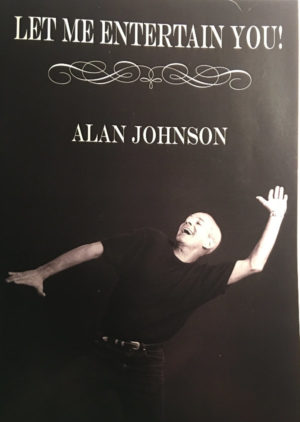 Having attended a prior celebration at the Paley in 2015, which focused on Johnson’s television work, I expected much the same program on Sunday. I was more than happy to go again, as I am a huge fan of his work.

Much to my delight and surprise, Mel Brooks was there!

That meant they were going to show the production numbers from Mel’s films that were choreographed by Alan Johnson.

It was a brilliant afternoon with Alan in attendance, a bit frail, but his wit intact. He was accompanied by his assistant Maria Del Bagno who produced the entire endeavor.

The first image on the big screen was that of Jack Cole. Alan said that Cole and Mel Brooks were his biggest influences. He said that seeing Jack Cole do his nightclub act was the single thing that inspired him to dance and choreograph. 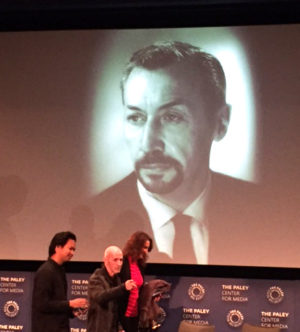 My favorite was from the Shirley Maclaine show. She did a number to “Sweet Georgia Brown” which was a fine tribute to choreographers Michael Kidd (my other fave), Bob Fosse, and black choreographers that came of age and changed the style of dance forever. (Lester Wilson, Michael Peters, and I think she mention George Faison).

She had four dancers with her and wow did that number rock! The orchestration changed with every section honoring the different choreographers.

The film clips were crème de la crème, especially ”I’m So Tired” from Blazing Saddles. In my opinion this hilarious number showcases the Mel Brooks- Alan Johnson collaboration brilliantly. It is a star turn from Madeline Kahn. I think she steals the show with this number. The song lyrics are hilarious and she plays it so deadpan. “Are you in show business?” she asks a cowboy who is watching the show.  “No Ma’am,” he answers. “Then get your friggin’ feet of the stage, she says and kicks him.

The other pieces were “Puttin’ On The Ritz” from Young Frankenstein and “Springtime for Hitler” from The Producers. Need I say more??? NO!

Sunday’s event closed with a clip of Alan himself leading a brilliant chorus of dancers to “Strike Up The Band,” a tribute to George Gershwin. I think every young choreographer should be made to watch this—for inspiration and to learn how to show off a star. For Johnson, like his mentor Jack Cole, knew how to make a female performer shine. I think Jack’s influence is apparent here. Today’s generation could learn much about how a real master combines character, comedy, and crystal-clean choreography.

Julie McDonald is a pioneer in the field of dance and choreography representation, having formed the first talent agency in 1985 devoted exclusively to dance.