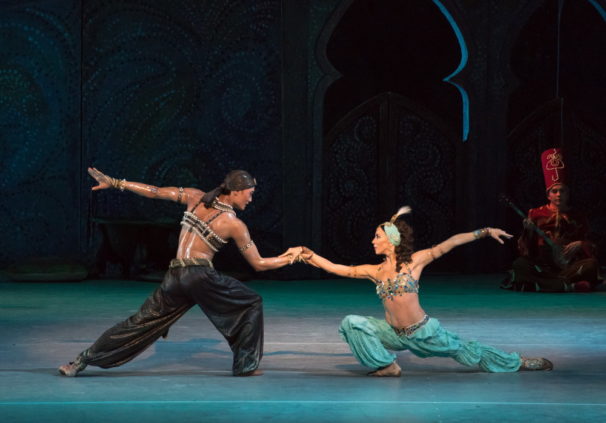 I admit that prior to Sunday night I had never seen a full-length, fully produced staging of Michel Fokine’s Schéhérazade — including lengthy orchestral prelude, sets, costumes, the works. The Mariinsky Ballet and Orchestra delivered their version this weekend at Segerstrom Center for the Arts as part of an all-Fokine program.

Schéhérazade is now, for me, a ballet of ballets. Amidst an opulent “Oriental” set garbed in stunning, beautifully fitting costumes, the dancers poured forth for forty-five minutes to Nikolai Rimsky-Korsakov’s searing score. And it was just awesome to hear this familiar music delivered by the Mariinsky Theatre orchestra. 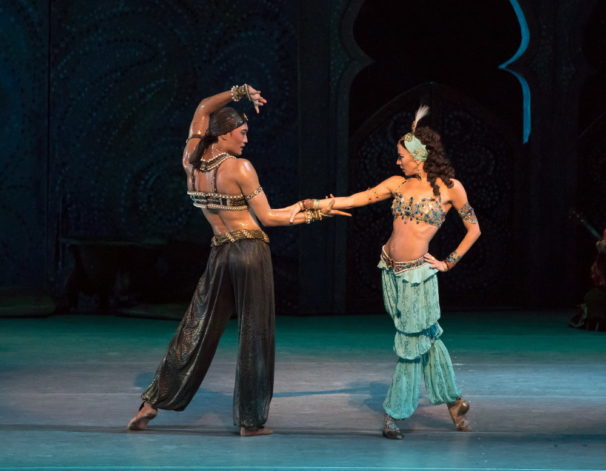 The ballet looked neither overblown nor outdated; rather the inverse, it looked thrilling and fresh. Within its wild-and-wooly Arabian Nights theme — replete with requisite oozy, snakey-slithering — there was a pleasing economy of style.

Even Fokine’s adventurous use of a spine more fluid than classical dance had ever witnessed; even his use of hyper-extended arms with hands bent at middle eastern angles; even the way he parsed out the ladies’ thrillingly deep back-bends, was ordered in neat patterns and groupings that lent coherence. And beautifully delivered by the Mariinsky corps de ballets.

The ballet closely tracks its music, telegraphing plot and character with dead clarity about who is who and what is what. Such a rarity, to ride a ballet’s dramatic arc and emerge at the end feeling like you actually went somewhere.

The journey traverses a fable of ‘One Thousand and One Nights,’ in which a Shah is betrayed by his wife Zobeide — danced with spunky modern-girl freedom by Tereshkina. She’s the harem’s capo dei capi, just one of many flexible fillies flouncing in gauzy pantaloons. Groups and gaggles of them. How exotic! 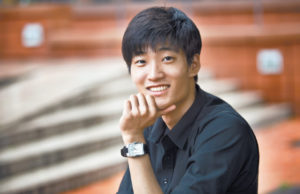 Kim danced Nijinsky’s originating role, the sexy Golden Slave, right at the dramatic edge, adding action-hero force that would make Nijinsky proud, I do believe. Both Kim’s immersive acting with his body, and his blasting into ballet pyrotechnics at every available opportunity evoked Nijinsky in such a respectful way.

The all-Fokine program alas fell somewhat flat in other areas, opening the bill with a strangely moribund “Chopinania” with sections danced at unprecedented slow tempi. Neither did “Spectre of the Rose,” a personal favorite, touch the magical realm of its pedigree. It’s a dream, guys! “The Swan,” aka “The Dying Swan,” bouréed through her last two minutes of life while an audience member in front of me toyed with her cellphone. Ekaterina Kondaurova, dancing the great female solo showcase, perished without me. 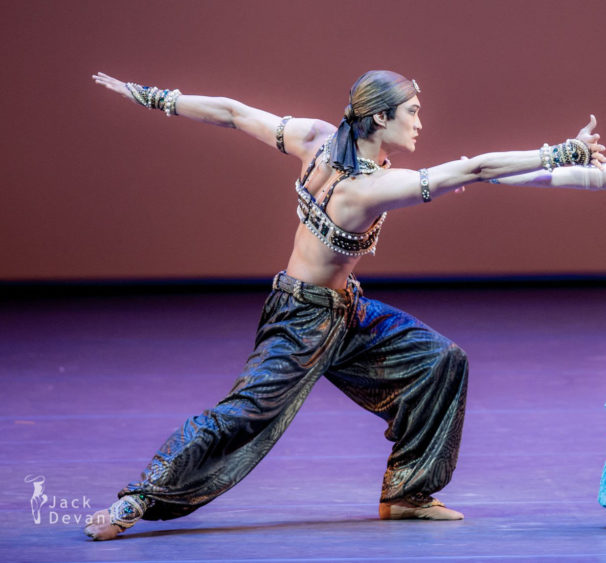