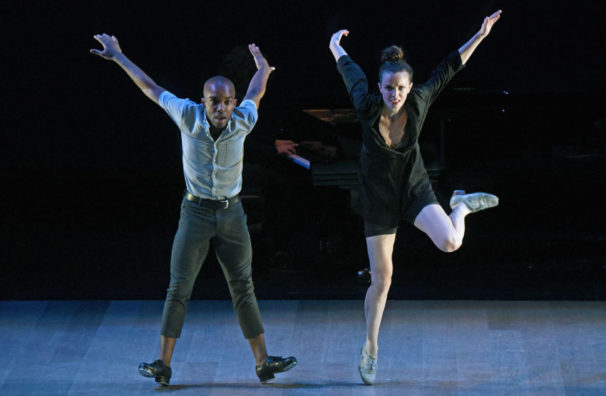 The night before seeing Dorrance Dance at The Wallis in Beverly Hills I binge- watched Astaire and Rogers clips on YouTube. Such elegant technique! Two bodies moving as one in gauzy ballrooms. Dancing as if on air. In the 1930s and ‘40s, Fred and Ginger embodied love and luxury for a generation eager to escape the Great Depression and impending war.

Michelle Dorrance and her company of enormously talented dancers explode this idea of tap. These men and women would fit right in at the gym, the therapist’s office, or the UPS Store. And they don’t time-step their way into love. Yes, they entertain. But instead of creating a distraction from the chaos and tragedies of our age – and we’re getting them in spades right now — Dorrance digs into dark places. 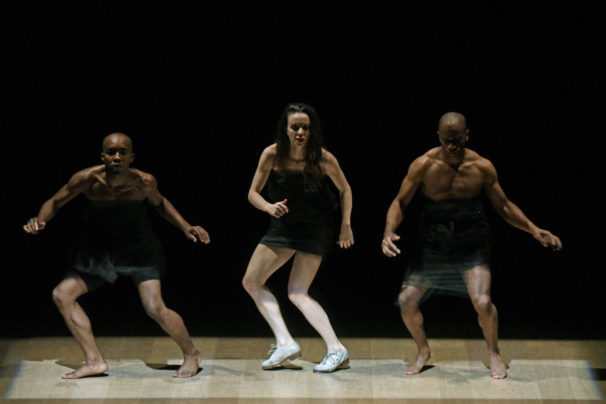 “Three to One” is somber in both lighting and feel. It ends with Dorrance literally dancing in the dark. It also shows her award-winning creativity. She, Matthew “Megawatt” West, and Byron Tittle barely move from their spots, as if held captive. Dorrance sports white tap shoes accentuating her white legs. The men, both African-American, are barefoot. All wear strange, spiky black dresses. It’s clever and it’s serious. 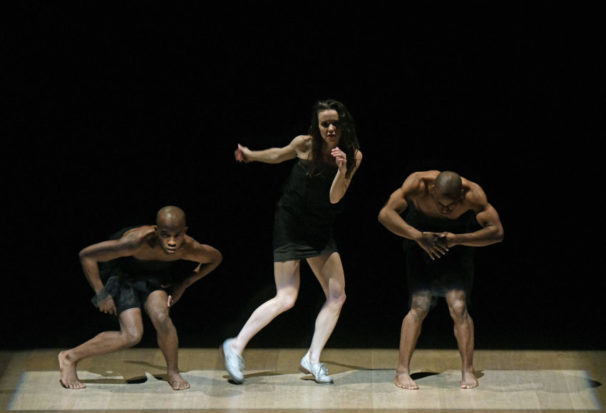 The first piece on Saturday’s program, “Jungle Blues,” while fun on the surface, is all street and hips and booze. When the chunky, bearded Nicholas Van Young twirls the girl into his arms – she of the plain red dress – he just as quickly drops her on the floor. She retaliates with a foot in his chest. The woman in black lace and red shoes drinks from a hip flask. The music by the Brandon Marsalis Quartet recalls a New Orleans funeral parade.

“Myelination” is a new, multi-part work – too long in my view – that gives each dancer a chance to show his or her technique. It also reveals the men and women to be independent equals. No romantic fluff here, although Dorrance does have a friendly duet with Tittle. Ephrat “Bounce” Asherie – a break dancer, not a tap artist – does a searing solo complete with silent screams and applause-generating spins on the floor. Christopher Broughton and Warren Craft, who is excitingly off balance all the time, dazzle in solos.

Dorrance dancers have torsos that move in unique and off-kilter ways. The group sections have a dynamic depth not usually associated with this art form – old school, in-person tap was usually a face-front-and-smile affair. I loved the shift between slow, solemn walking and million-taps-a-minute choreography. I loved seeing a live band on stage, but the score by Dorrance’s brother Donovan is repetitive and “Myelination” is ultimately a tap ballet in search of a story. The work ends in the middle of a phrase, perhaps signaling there’s more to come in Dorrance’s genre-bending explorations. 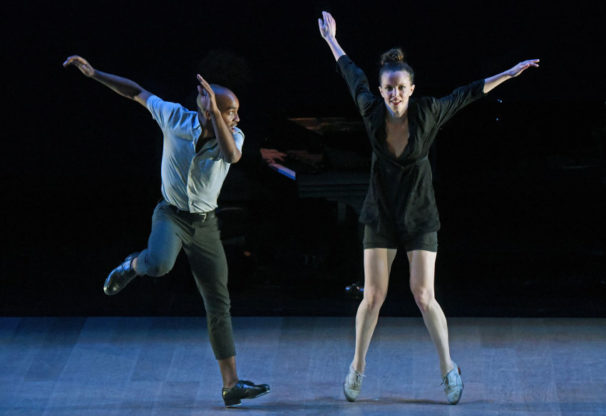 There’s a reason Dorrance is a MacArthur Fellow. As the Bessie Award committee noted, she is “blasting open our notions of tap.” As a dancer she is a raw, ungainly beauty – legs astride, arms flailing. Her choreography challenges us, sometimes overwhelming us with sound and fury. And as befits the times, she never gives us gauzy ballrooms. For that, and much more, we owe her a round of applause.

One comment on “REVIEW: Michelle Dorrance Dance @ The Wallis”