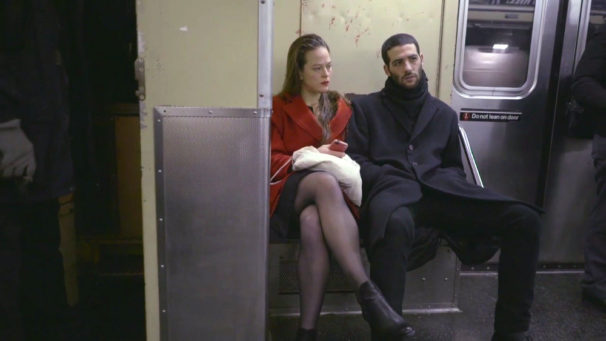 This ‘shocker’ content notwithstanding, Bobbi Jene imparts affection for its subject in a pleasing manner as director Elvira Lind‘s well constructed and adeptly edited film spools over time. The camera keeps a firm and appreciative gaze on the pale-complexioned, corn-fed (if only she didn’t have an eating disorder) Midwestern-born dancer with a mane of long, often-tangled hair. Bobbi Jene Smith’s primary professional credential as a ten-year alum of Israel’s Batsheva Dance Company (where as one-time Ohad Naharin girlfriend she held nearly goddess stature) means so very much to “dance people.” But it does not define meritorious documentary fodder for the rest of the world. Indeed, only in its final frames does the movie reveal a performer of exceptional dance skill. That would seem an important fact to document early on.

I was nonetheless touched by the love story accompanying Bobbi’s artistic coming-of-age saga — that between herself and a young(er) Israeli dancer. The couple struggles against a culture gap, ten-year age difference and the huge Atlantic Ocean, all conspiring to drive them apart. Film also portrays a tender, however tentative, mother-daughter relationship. Bobbi Jene will likely appeal to a cohort of female film goers who may identify with Ms. Smith’s youthful challenges, as did I, remembering, in retrospect, my own.