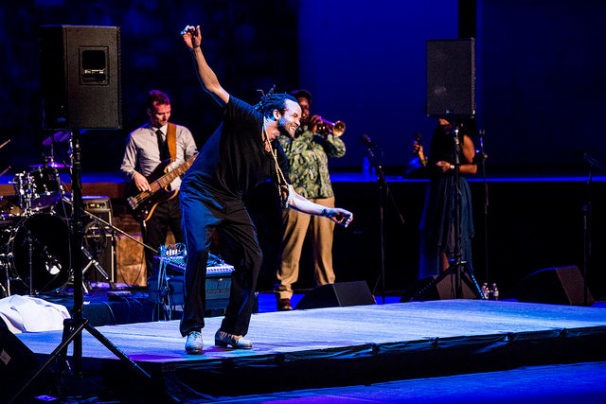 It is a Dance Criticism 401 assignment describing Savion Glover in performance — savagely fit, in top form, at his most forthcoming. Words fall short. Yet that is what we had at Saturday’s festive season-opener of the John Anson Ford Amphitheatre. The refurbished Ford’s long commitment to dance, season after season presenting local and visiting troupes on its stage, made the Savion night that much more special. 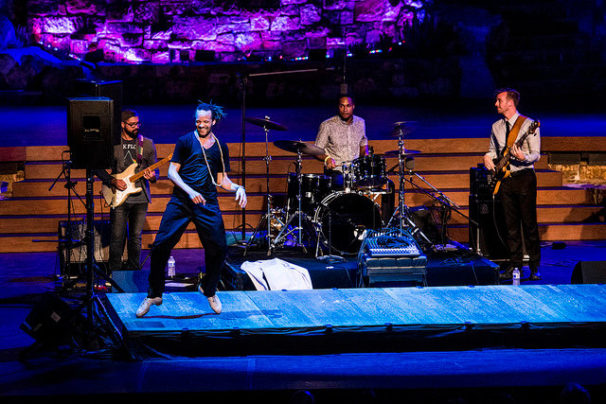 Glover is the dance-world’s Mozart, so dazzling and nearly beyond comprehension is his brilliance. Motoring around his carefully miked tap-dance platform, he took to performing out of doors in a way that worked better than my many viewings of him in theaters. Insanely complex rhythms including doublets and triplets, pointe work, back slaps, and down-and-dirties blasted into the night air; you could watch him seize a rhythmic idea and dance it through. The first sound of his mighty tap shoes (they resemble a custom-built car) is so supremely confident it drills a hole in your ear, then in your head. Over time, it pierces your heart.

Glover perhaps compares better to Charlie Parker. He fits into the jazz tradition that seeks not aesthetic purity, rather the opposite. It can be a messy, often clashing, fit. It has jagged edges. But as a body-instrumentalist, he is part of an ensemble. 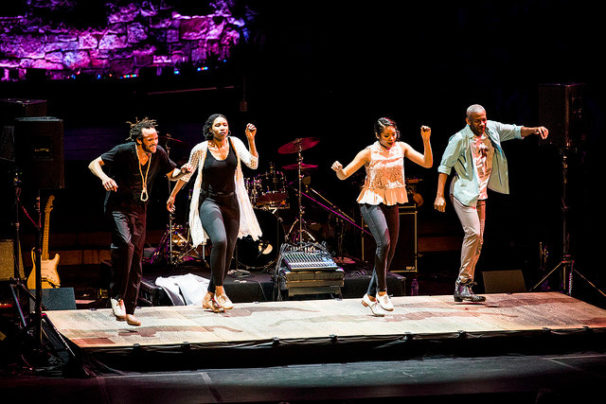 The show offered the fun visual of a live band, Dance Candy, tucked into the Ford’s hillside (rear) wall. Before these cool cats, Glover lay down swathes of his trademark lengthy improvisatory riffs. The music was mostly funk, but mixed in was a lighter swinging beat providing Glover air space to fill with sound. He taunted and teased the bass player, the keyboardist, the drummer, and surprisingly the show included a girl singer chiming in nothing less than “My Favorite Things.” That ditty, nearly untouchable as the anthem of Coltrane, was a fun choice. And Glover made it rock. 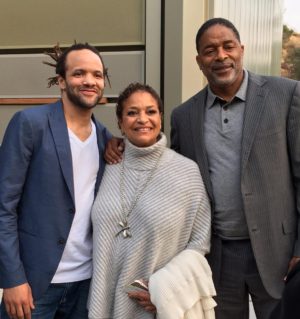 Then sharing the stage with his posse of three other tappers (Marshall Davis, Jr., Robyn Watson and Karissa Royster), Glover delivered a choreographed work to recorded music. Facing the audience, beaming smiles, and bringing the beat waaaay down, Glover, in this easy-peasy mode, melded with the group. He was one of the gang; not the genius Mozart, not the soloist Charlie Parker nor John Coltrane; he was just another hoofer, and it made him human.

Fellow tap dancer Debbie Allen, whom Glover honored with a stage shout-out, shared her sentiment in an email to arts·meme. “He is pure genius. He is ‘the Truth.’ I felt so lucky to be there.”

2 thoughts on “REVIEW: Savion Glover sizzling at the Ford”