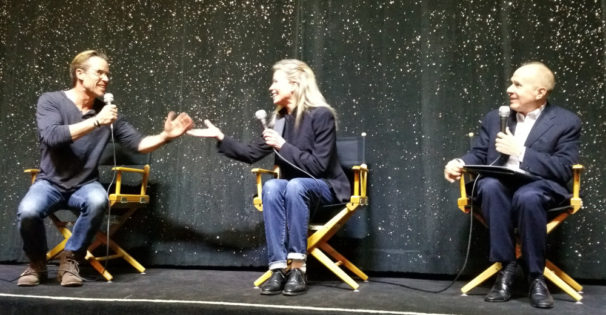 ”He was my friend. I loved the man,” said actress Kim Basinger of film director Curtis Hanson, who died tragically at a too-young age in September 2016. Basinger’s two films for Hanson included L.A. CONFIDENTIAL (1997) and 8 MILE (2002).  The super slender blonde, a down-home stunner, sparkled alongside co-star Guy Pearce in a joint interview with film critic Stephen Farber. The evening, hosted by Farber, was part of Laemmle “Anniversary Classics”‘s twentieth-anniversary screening of “Confidential.”

The duo took part in an exceptional ensemble cast that included Kevin Spacey, Russell Crowe, Danny DeVito and James Cromwell, all carving memorable character studies that raised the neo-noir to the level of hallowed classic.

Basinger’s passionate remarks were delivered in a subdued tone tinged in the kind of sadness that made the actress’s performance as Lynn Bracken, a high-end call girl ‘cut’ [by plastic surgery] to resemble Veronica Lake, so compelling. The role won Basinger, by then a veteran film actress, an Academy Award for Best Supporting Actress.

Intriguingly clad in a New York-actor look — blue jeans with cuffed trousers, like James Dean used to wear, white sox, and men’s tie shoes — Basinger chatted sweetly with Farber. In a velvety voice she described how she only reluctantly came on board the picture.

“I had just given birth to my daughter when I received the script,” she said. “I was very in love with being a mom. I read it a first, second, and then third time and said to my agent, ‘You know, I’m not doing this. I’m not playing a whore. I’m a mother now.’

“I’d done a lot of risqué things in my life,” she admitted.

“My agent kept on me. ‘There’s something in this script,’ he insisted. Finally, I met Curtis [Hanson] at the Formosa Café [subsequently closed, the thirties-era restaurant/bar was location for several of the movie’s scenes].

“And that started the seduction of Curtis Hanson.”

At the meeting, Hanson was prepared with storyboards and more.“He was in a visual mode. He brought pictures of Robert Mitchum film noir. He was such an eloquent beautiful soul – but he was very manipulative! 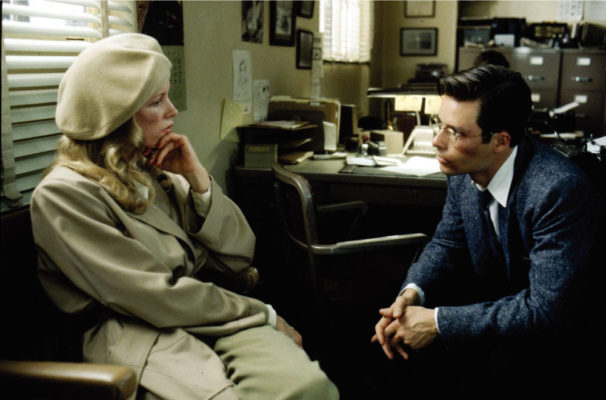 Pearce shared his equally touching story of getting onto the movie to play the incorruptible rookie cop Ed Exley. “I had first come to L.A. in ’94 to promote “Priscilla” [THE ADVENTURES OF PRISCILLA, QUEEN OF THE DESERT],” he said in his charming Aussie accent.

“I wasn’t keen to come here. I was struggling. I met an agent. He said, ‘Come back in ’95. You can stay with me.’ I did. I did a ton of auditions. In November/December, I was introduced to “Confidential.” I knew Russell was doing it. I was a big fan of Russell’s [from Down Under]. 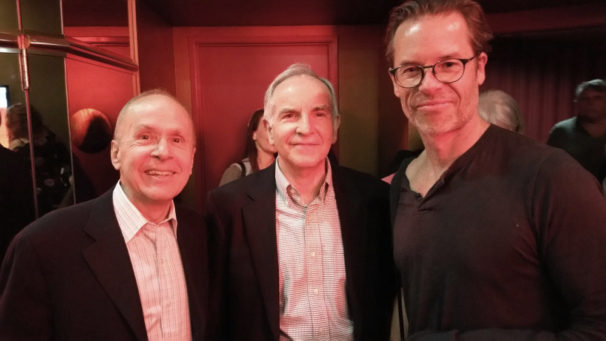 “I did multiple auditions, first with video camera and then was asked to come back and read with Curtis. Then I did a proper screen test, with a whole crew and makeup. We filmed the screen test. I just got offered the role. Kim came on board. Then Kevin. Then Danny.

“It was my first American film. I’ve been involved in many great films: THE PROPOSITION (2005) and MOMENTO (2000). This was the greatest film I’ve ever been part of.”

Said Basinger, “I had two Aussies to help me play this part. I didn’t know either [Pearce or Crowe]. When I saw “Priscilla,” I thought, if that guy can play that person—wow!”

The two actors spent much of the interview probing why Hanson was so special. Basinger recalled, “Curtis was very firm, very decided. He just knows, no matter what the fight was, he had his mind made up, who he was going to have in his film … two unknown Aussie actors. But I also heard that Curtis was asked by Warner Bros. execs, ‘Are you going to cast any stars in this movie?’

This memory brought a howl. The cluster of then-unknowns went on to be major actors of their generation.

Praising the director, Basinger noted, “He had a magical connection with actors, and with people. And he was very very clear. Curtis taught me to believe in myself.”

Said Pearce: “He was utterly inspiring. The film was very challenging. I had worked on other films. But this was like a film class. He taught me to act in front of the camera. He taught me about stillness. Russell was also helpful to me. During the interrogation scene, Russell came up to me and said, ‘Don’t blink.’

“The adaptation from the incredible voice [in James Ellroy’s book] that treads between humor and darkness, I think, is what makes the film so successful. The way Brian [Helgeland, screenplay writer] and Curtis adapted that book was one of the great aspects of the film.”

Basinger took the opportunity of an infrequent appearance before a sold-out audience to admit, “I’m so happy Guy is here. The night I won the Oscar, I didn’t have a speech prepared. TITANIC was so strong, and I had met Gloria Stuart. What I regret is that I never thanked Guy and Russell. Such brilliant screen partners who also deserved Academy Awards. And I never thanked them properly.”