The place to be in the dance world this past weekend was splendiforous Santa Barbara, California, for the opening of “Radical Bodies: Anna Halprin, Simone Forti, and Yvonne Rainer in California and New York, 1955-1972,” an exhibit at UC Santa Barbara’s AD&A Museum.

Offering toasts, in photo above, to five years of research and writing, thinking and talking, hunting and gathering are three creative co-curators, Ninotchka D. Bennahum (Professor of Theater and Dance, UCSB), Wendy Perron ( Editor-at-Large, Dance Magazine) and Bruce Robertson (Professor of Art History and Director of the AD&A Museum). Their exhibit sand-blasts a space in the continuum of dance history for three recognized but undervalued artists. Halprin, Forti and Rainer form a well-grouped trio for many reasons. They worked together and influenced each other as artists. They share West Coast roots; all are Jewish, all the offspring of European exiles. All eschewed the dogma of modern dance of their day to go out on a limb and express their truest selves. And all three valiant ladies, miraculously, are still with us and attended the opening. 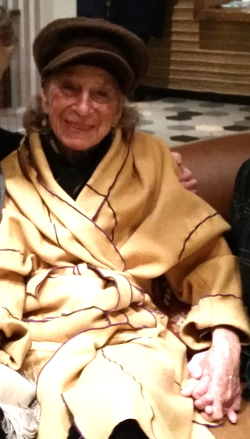 In a marvelous pre-exhibit conference, it was suggested that in their

To quote curator Perron, “We are delving into the period, especially looking at how much Anna Halprin’s approach to improvisation influenced Judson Dance Theater, and Simone Forti acted as a bridge between West and East Coasts.”

Rainer emerges as a dance devil, a persistent rebel-with-a-cause, a brilliant theoretician, who, in conference remarks called for a cultural return to a bawdy sense of humor. The bios, reprinted below, put their histories on the record. The exhibit, running through April’s end and then transferring to the New York Public Library for the Performing Arts at Lincoln Center, use rare photos and video, to give visualization. 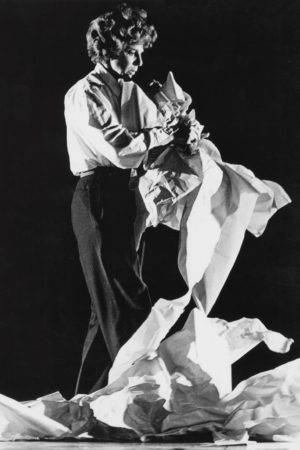 Anna Halprin (b. 1920) revolutionized dance with her belief that movement is a pathway to a just and moral society. The inventor of task-based improvisation, a compositional technique and a perceptual philosophy, Halprin seeded the radical dance of the 1960s.

Born Ann (Hannah) Schuman, the daughter of Eastern European Jews who fled Russian pogroms, Halprin grew up in progressive Midwestern schools and studied with the great dance educator Margaret H’Doubler Claxton at the University of Wisconsin, graduating in 1942. She married fellow Hillel member Lawrence Halprin; they moved to Harvard where he studied architecture with Walter Gropius and she developed improvisational techniques for teaching children. When Larry was drafted, she studied briefly with Martha Graham and danced on Broadway. After the war, she joined Larry in San Francisco, launching her choreographic career. Her love affair with Larry was lifelong, the root of a creative partnership that opened new spaces for communities to understand the body as a natural terrain.

In 1955, Halprin founded the San Francisco Dancers’ Workshop, a collaborative company that toured internationally throughout the 1960s and 70s. Deeply committed to the Civil Rights and anti-war movements, Anna created spontaneous happenings, each civic gathering an expression of the body politic. In 1972, Halprin was diagnosed with cancer. It was then that she returned Ann to its Hebraic root: Anna. 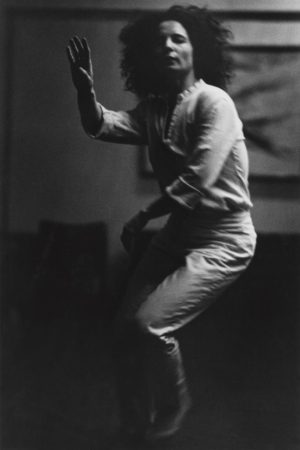 Simone Forti (b.1935) was born in Florence, Italy. Her family, being Jewish, fled Italy in 1938, ending up in Los Angeles in 1939. Attending Reed College, she married her fellow student, the artist Robert Morris, and moved with him without graduating to San Francisco in 1955. Almost immediately she began studying dance with Anna Halprin; at the same time, she continued to work as a visual artist.

Early in 1960, Forti and Morris decided to move to New York. During classes at Merce Cunningham’s studio she became friends with Yvonne Rainer and persuaded Rainer to attend Halprin’s summer workshop. Forti was the linchpin between Halprin and Rainer, and a catalyst for many other artists. Rainer said at the time, and often repeated it: “I can say that my creative life as a dancer began when I met her, shortly before our trip west last year.”

In 1962, she divorced Morris and married the performance artist Robert Whitman. For the next few years she worked primarily as a performer (as both a dancer and vocalist), and did not focus on her own work until taking up residence in Rome in 1968 for a year. By 1970 she had returned to Los Angeles and begun teaching regularly, with a life-long practice based on the close observation of bodies (hers, others and animals), their movements in space, and an intense, ethical awareness of interconnection and networks, social and physical. 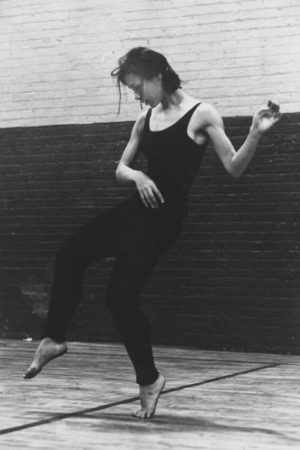 Yvonne Rainer (b.1934) was born in San Francisco. Her father, Joseph (Rainero) was born in Italy, her mother, Jeanette, was the daughter of Jewish immigrants from Poland; both were anarchists, vegetarians, working-class, and interested in politics and culture. Rainer dropped out of UC Berkeley and studied acting while hanging out in Beat poetry circles. After meeting the painter Al Held, she joined him in New York in 1956, getting to know many artists and beginning to study dance, while continuing to plan a career in theater.  Although she often visited her family in San Francisco, she did not live again on the West Coast for many decades.

In 1959, Rainer left Al Held and studied dance full-time, taking classes at the Graham School and Ballet Arts. In 1960, she took classes with Merce Cunningham, Anna Halprin, and Robert Dunn, a student of John Cage. In 1962, she was a co-founder of Judson Dance Theater, and became a leading figure in the explosion of avant-garde dance in New York and is often characterized as a “minimalist.” By 1974 her attention turned to making films, and she did not return to dance-making until 2000. Her work, whether in dance or film, is famous for the rigor with which she has attacked issues of representation, medium and genre, from her “No Manifesto” of 1965 to the investigation of narrative and character in her films.